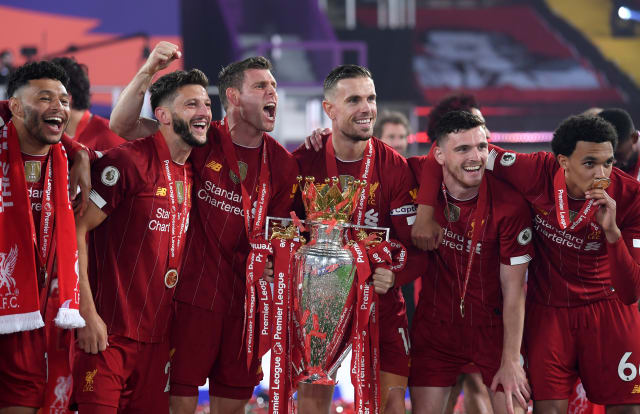 Here, the PA news agency looks at some of the best examples from July 23.

It was a wild night of celebrations at Elland Road as Leeds lifted the Championship title, and captain Liam Cooper was making sure the silverware stayed in his hands all night, taking it home to Hull.

Premier League champion Andy Robertson was still pinching himself that Liverpool had managed to end their 30-year wait for the top-flight title.

Jude Bellingham bid an emotional farewell to Birmingham as the 17-year-old prepares to join Borussia Dortmund.

It was a muted end to the Championship season for Wayne Rooney, too, as Derby fell well short of the play-offs.

West Brom are wondering when they will ‘officially’ be welcomed into the Premier League.

Nottingham Forest fan and England bowler Stuart Broad had salt rubbed into his wounds the morning after his club crashed out of the play-off places thanks to a heavy defeat by Stoke.

Before turning his focus to winning the decisive third Test against the West Indies.

England players showed off the red caps they will wear during the match in support of the Ruth Strauss Foundation.

Sussex’s Luke Wright was excited to be back at work.

While his Mercedes team-mate Valtteri Bottas had an important health message.

Team GB middle-distance runner Eilish McColgan looked ahead to the start of the postponed Olympic Games in Tokyo one year from today.

LeBron James was excited to get back on the court as the Los Angeles Lakers prepare for the return of the NBA.

The newest franchise in the NHL revealed an unusual name.

And they were welcomed to the city by star Seahawks quarterback Russell Wilson.