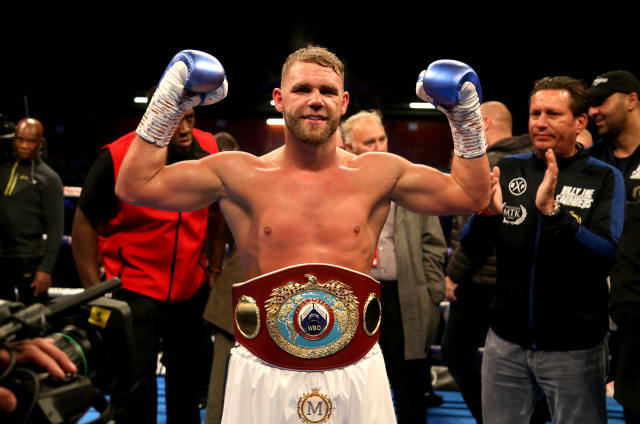 Billy Joe Saunders has had his suspension lifted but has been fined £15,000 after appearing to encourage domestic violence.

A video on social media surfaced at the end of March, in which Saunders filmed himself using a punching bag to demonstrate how men could hit their female partners if they argue during the coronavirus lockdown.

Saunders admitted he made “a silly mistake” while his promoter Eddie Hearn described the clip as “idiotic” and “unacceptable”, with the WBO super-middleweight champion also heavily criticised by domestic abuse charities.

His licence was immediately withdrawn by the British Boxing Board of Control, which found Saunders guilty of misconduct at Wednesday’s hearing and has ordered his fine to be donated to charity.

However, he is now free to fight again following his latest brush with the BBBofC, which handed out a £100,000 fine in September 2018 after another social media video where Saunders encouraged a woman to perform a sex act in exchange for £150 worth of drugs.

A short BBBofC statement read: “Billy Joe Saunders appeared before stewards of the board on Wednesday, 22nd July 2020 due to recent comments made on social media.

“Following consideration of Mr Saunders explanation, the stewards found Mr Saunders guilty of misconduct and have fined him £15,000 to be donated to charities. The suspension of his boxer’s licence has been lifted.”

Sandra Horley, chief executive of national domestic abuse charity Refuge, said at the time Saunders’ conduct was “as dangerous as it is shocking”.

Following the backlash from his video, Saunders announced he would donate £25,000 to a domestic violence charity.

Saunders was close to arranging a fight with Saul ‘Canelo’ Alvarez in Las Vegas in May before the outbreak of COVID-19 led to a shutdown of all major sporting events.

It appears Saunders is now out of the running for a lucrative showdown against Alvarez, with Callum Smith understood to be in pole position to take a fight with the Mexican superstar later this year.