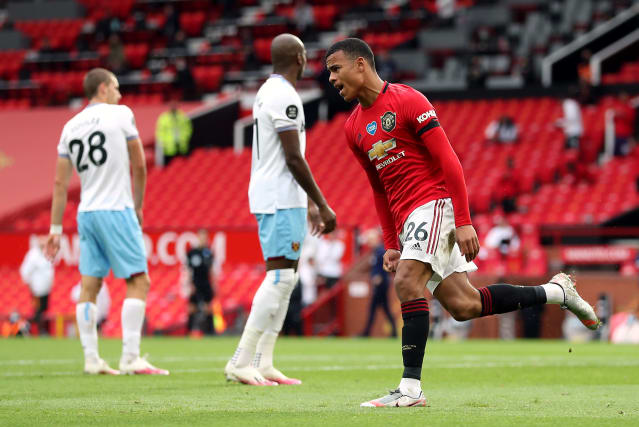 Manchester United nudged into the Champions League places for the first time since September after teenager Mason Greenwood sealed a hard-fought point against West Ham in the penultimate match of the season.

After seeing a 19-match unbeaten run come to an abrupt halt in Sunday’s FA Cup semi-final loss to Chelsea, Ole Gunnar Solskjaer’s side had to dust themselves down for a key clash with the relegation-threatened Hammers.

Paul Pogba’s needless handball allowed Michail Antonio to give David Moyes’ visitors a surprise lead from the spot, but United hit back through teenage star Greenwood to secure a 1-1 draw at an empty Old Trafford.

The point guarantees West Ham’s Premier League survival and was enough to ensure Solskjaer’s Reds are in a top-four spot for the first time since mid-September.

All eyes will be on Sunday’s fascinating encounter at the King Power Stadium, where United only need to avoid defeat to fifth-placed Leicester to secure a return to European football’s top table.

There were points on Wednesday night when it looked like they would blow this chance – no more so than when Antonio scored late in the first half after the video assistant referee picked up a blatant Pogba handball.

Former United captain Gary Neville said in his role as a Sky Sports commentator it was “embarrassing” to protect his face when Declan Rice took aim and homegrown talent Greenwood saved his blushes with a low strike early in the second half.

The 18-year-old moved level with George Best, Brian Kidd and Wayne Rooney as United’s top-scoring teenager in a single season – a 17th of the campaign that could prove pivotal come the final shake-up.

It was, in truth, a rather limp response to the FA Cup loss to Chelsea, with a bright start quickly petering out after Anthony Martial forced Lukasz Fabianski into a low save and Greenwood also had an effort.

West Ham frustrated by sitting deep and soaking up the pressure, while posing questions with crosses from open play and set-pieces. Angelo Ogbonna underlined that threat when meeting a corner routine with a header that needed cleaner contact.

Marcus Rashford tried his luck from range in a bid to jolt their ponderous attack into life, before surprise inclusion Timothy Fosu-Mensah directed wide and Ogbonna threw himself in front of a Greenwood fizzer.

Solskjaer’s side were not only struggling for creativity but resilience at the back, with Victor Lindelof left breathing a sigh of relief when Antonio came in behind him to get away a header that David de Gea dealt with.

The under-fire United goalkeeper had precious little to deal in the first half with but would concede at the death.

Fosu-Mensah was booked for bringing down Antonio and Rice unleashed a fierce strike from the resulting free-kick, with Pogba hitting the deck after getting in the way of that effort.

That block led to audible squeals from apoplectic West Ham players, who made their calls for handball loud and clear to referee Paul Tierney.

The VAR eventually intervened and awarded a penalty that Antonio stepped up to coolly slot home.

Superb link-up between Greenwood and Martial eventually led to the former being played in by the Frenchman, with the teenager sending an emphatic left-footed strike past Fabianski.

The hosts were on top from that point but were snatching at opportunities. Worse still, West Ham’s threat was not going away.

De Gea impressively tipped over a deflected Jarrod Bowen strike and Ben Johnson flashed wide as West Ham enjoyed a spell in the ascendancy, with Rice whipping just off target from distance.

The drinks break did not bring renewed impetus from the hosts and Fernandes was booked for an altercation with Mark Noble, which led the VAR to check for a possible red card for violent conduct.

The Portuguese did not see red and substitute Odion Ighalo directed wide as the hosts tried, but failed, to eke out a winner.