David Law has the edge as European Tour action returns 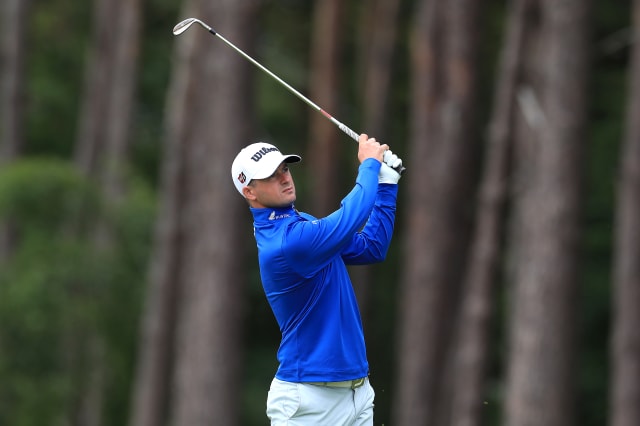 A brilliant burst of scoring vaulted Scotland’s David Law to the top of the leaderboard as the European Tour enjoyed a successful, if somewhat surreal, return to action at the British Masters.

Law began his first round at Close House with five straight pars but then birdied the next five holes in a row, produced a brilliant up and down from thick rough to save par on the 11th and birdied the 12th and 13th as well.

The resulting seven-under-par 64 left the 29-year-old from Aberdeen a shot ahead of Oliver Fisher, Garrick Porteous and Renato Paratore, with 2018 winner Eddie Pepperell among those two shots further back.

Law had missed five cuts in seven events in 2020, including four in a row before the sport shut down due to the coronavirus pandemic, although a recent course-record 60 at Hazlehead had suggested a return to the sort of form which saw him win the ISPS Handa Vic Open in February 2019.

“I did not really know what to expect and it’s probably (about having) a mindset of acceptance,” Law said. “You need to know it might not go your way this week. It’s only one round but it’s a very positive start.

“It was guilt-free time at home because there were no tournaments on that you were missing to be at home. It was a strange time but I got time at home with the family; we have a 19-month-old daughter and we’ll never get that time again.”

Fisher, who carded the first 59 in European Tour history in the Portugal Masters in 2018, was another player to enjoy time at home with a young family during the lockdown, but found the nasal swab test for Covid-19 a far less pleasurable experience.

“I felt a little bit violated I must say,” Fisher said with a smile. “It felt like he was trying to find my brain in there somewhere.”

All players, caddies and officials were tested before travelling to the venue and again when arriving on site, with no reported positives so far. Face masks are required indoors and social distancing measures observed.

No spectators have been allowed on the course, although Pepperell had one particular viewer in mind when he recovered from a slow start with four birdies in six holes from the sixth.

“I think having TV cameras there was a bit of a God-send,” Pepperell said. “When they’re there, you’re aware you’re on television. My mum’s watching, so I want to impress her.”

One of the most impressive rounds of the day came from former US Open champion Michael Campbell, who admitted he was “completely flabbergasted” with an opening 68.

Campbell has not made a cut on the European Tour since 2013 as he struggled with a foot injury and loss of form, but the 51-year-old New Zealander rolled back the years with the help of his caddie, his 21-year-old son Thomas.

“My expectations were pretty much none,” Campbell said. “I wanted to get out here and enjoy myself with my son Thomas. When I had my success from 1999 to 2005 he was only seven, so he can’t remember.

“My main focus is on the Champions Tour but it’s hard to get in there. I asked for 15 invites last year and got one. It doesn’t mean much, being a major winner. Paul Lawrie has had exactly the same problem.”

Tournament host Lee Westwood ended the day six shots off the lead but relatively satisfied with his 70, adding: “I didn’t really have control of my swing and I mis-clubbed a few times which is probably not acceptable being a member here.

“But I putted really well and ground it out and I think one under par is probably a really good score for the way that I played.”

If only Westwood could have celebrated by kissing his fiance and caddie Helen Storey on the 18th green. “We weren’t sure if we were allowed to,” he added. “It’s strange, should we, shouldn’t we?”