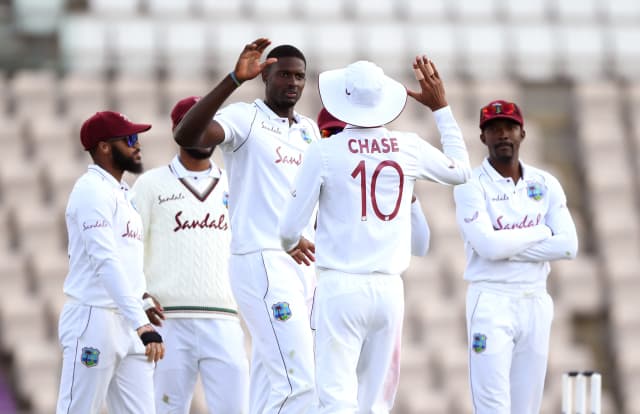 West Indies assistant Roddy Estwick revealed he and the rest of the coaching staff are repeatedly reminding the players of their opportunity to make history in the #raisethebat series decider against England this week.

It has been 32 years since the Windies prevailed in a Test series in England while their last six visits have ended in defeat, but the tourists have a chance to end that undesirable streak at Emirates Old Trafford.

Having drawn first blood at the Ageas Bowl, they were beaten by a Ben Stokes-inspired England at Manchester earlier this week, leaving the series delicately balanced at 1-1 heading into the final Test which starts on Friday.

The Windies currently hold the Wisden Trophy after beating England in the Caribbean last year, but Estwick pointed out how special a victory on these shores would be.

“We’re constantly reminding them that they’ve got a chance to change something that hasn’t happened for 32 years,” Estwick said.

“We’ve played them a few times over the last two or three years and we’ve won odd Test matches and we obviously won in the Caribbean.

“We want to go one step better here in England, we really want to win that Test match and we’ve got to be up for it. When you look at this game, it’s a final for both teams.

“We can’t have any excuses, we’ve got to go out there and bring our A-game, all 11 players that walk on that park. We’ve got to leave no stone unturned to make sure we get the result that the Caribbean deserves.”

While England have decided to rotate their seamers for the first two Tests and are poised to do so again, Estwick hinted the Windies’ pace attack could remain unchanged for a third match in three weeks.

The quartet of Kemar Roach, Jason Holder, Shannon Gabriel and Alzarri Joseph have had a heavy workload and the latter two left the field at various points during the second Test because of minor knocks.

But Estwick, the Windies bowling coach, reported no injury concerns two days out from the decider.

He added: “Our seam department are very experienced, we will trust them, sit down with them and have discussions.

“They must have been pulling up quite well because Shannon was ready to go into the nets today to have a bowl. The rain curtailed that but I think they’ll be fine. I saw Kemar last night and he was looking fresh.

“We’ll try to get them to stay off their feet and to get the adequate rest and the treatment that they need, because come Friday there’s no second-guessing. It’s a big Test match for us, we’ve just got to be ready.”