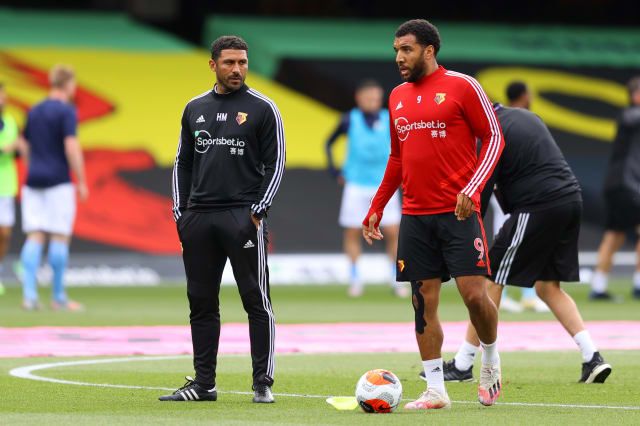 Watford dropped into the Premier League relegation zone on Tuesday and interim head coach Hayden Mullins does not expect to receive any favours from Arsenal on the final day.

The Hornets 4-0 loss at home to Manchester City dented their survival hopes before Aston Villa’s victory over the Gunners later saw the Vicarage Road club fall into the bottom three for the first time since February.

An intriguing backdrop to Sunday’s fixture at the Emirates will be Troy Deeney’s comments about the north London club back in October 2017.

Watford’s captain suggested the Gunners did not have the “cojones” for the fight when they secured a 2-1 victory on that occasion and Hector Bellerin, Granit Xhaka and Alexandre Lacazette remain part of Mikel Arteta’s squad.

Arsenal also have the small prospect of the FA Cup Final on August 1 to worry about, but rookie boss Mullins will stay concentrated on his own side.

“We can’t think about that. We have to think about preparing ourselves right,” the 41-year-old said.

“Obviously it is a tough game against a very good side in Arsenal. They are doing very well at the moment, but we can only concentrate on ourselves and we are not really going to worry about other results going our way.”

Watford were able to hold firm against Man City on Tuesday for 31 minutes before Raheem Sterling opened the floodgates.

He added another before half-time and Phil Foden and Aymeric Laporte found the net in the second period to put the Hornets goal difference back to -27.

Mullins added: “We did try to set up with a certain discipline, but they are a good side and a tough side. Sometimes you have to look at opposition and hold your hands up.”

Goalkeeper Ben Foster admitted the confidence of the squad was “crazy, crazy low” after the loss and insisted the players were to blame for Nigel Pearson being sacked on Sunday.

Pearson took over in December with Watford seven points from safety and appeared to be popular with the group after leading them out of the bottom three with seven wins from his 20 league matches in charge.

“I don’t know if the confidence is very low,” Mullins said.

“When you are a player and you are out on the pitch, you have been out there for 90 minutes, so it feels a lot different and you have a lot of emotions going on in your head.

“I don’t know what Fozzie said so I can’t comment. Maybe when he gets in tomorrow (Wednesday) it will be a completely different outlook.

Foster told Sky Sports: “We have to look at ourselves. We’ve got a massive game on Sunday and that’s all we’ve got to look at now.”

Sterling’s brace took his tally for the season to 29, with 19 in the top flight.

He took over spot-kick duties from Kevin De Bruyne at Vicarage Road and although his shot was saved, the attacker tapped home the rebound but was unable to complete a hat-trick before he was withdrawn in the 64th minutes.

“It’s massive as a winger to score 20 goals in the Premier League,” Sterling told mancity.com. “We have one more game left, so I hope I can do it then.

“I scored the first one and I knew I was on 18 so I stepped up (for the penalty). I knew I had another chance to get the hat-trick, it didn’t happen but I’m really happy with the two goals.”