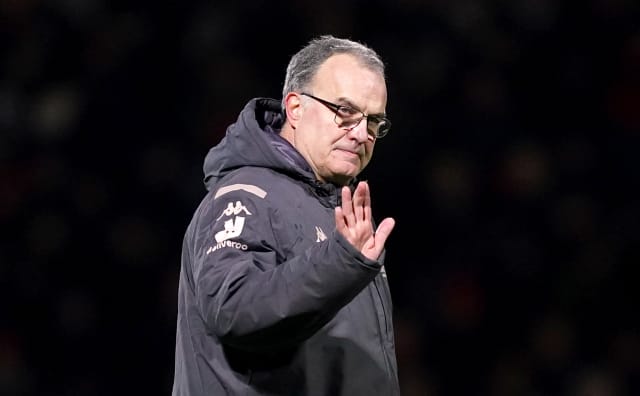 Leeds boss Marcelo Bielsa has paid tribute to assistant Carlos Corberan and the rest of his backroom staff.

Corberan is expected to be named as new manager at Huddersfield, who sacked Danny Cowley on Sunday, although neither club have confirmed his appointment.

“Each of them made a bigger contribution than me for the team to grow,” Bielsa said of his coaching team. “Please believe this, it is true.

“There is an example about the evaluation I’m making about my colleagues that confirms what I’m saying is not exaggerated.

“Carlos Corberan has been chosen by one Championship team to be the manager of his first team and it is a team that one year ago was in the Premier League. This proves what I am saying is true.”

Bielsa expressed his gratitude again to his players and extended his thanks to his medical team and all the club’s non-playing staff.

“I know I am talking a lot, but there are a lot of people who made a lot for us in the shadows of the club,” Bielsa said.

“The ladies in the kitchen are wonderful people. In this isolation period, my wife couldn’t be here with me, I’m living alone now and this lady, Bella, once a week used to leave outside the door, one container with very tasty soup.

“Those things are not linked with the football, but emotion. It’s a big contribution.

“I can talk also, in the same way, about Bella’s colleagues. People in the nutrition department, Thorp Arch security, the cleaners when they have everything clean in the isolation period, this was very important.

“The groundstaff, they are artists, if you look at our grounds. The same with every person who works in the club, not just at Thorp Arch, but Elland Road.

“We didn’t meet them every day, but we received their support. I really need to describe all we get from the club.

“I tell this story about Bella. Maybe I should not because it’s private, but with every person with us in this club, I could say a story as I did with Bella.”

Bielsa said after Leeds’ win at Derby on Sunday that he would sit down to discuss his own future with club owner Andrea Radrizzani this week.

“Of course, we need time to let this period pass because now all the emotions are high,” he said. “We need to be, all of us, calm to think more clearly.”

Leeds play their final game of the season at home on Wednesday against Charlton, who must win to guarantee survival.

“The goal of tomorrow’s match is to honour the competition,” Bielsa added. “We will take the last match as seriously as we play every match in the league.”

Bielsa also paid tribute to Gaetano Berardi, who faces nine months on the sidelines after tearing his anterior cruciate ligament at Derby on Sunday.

The Swiss defender’s contract expires at the end of the season and Bielsa did not confirm whether it would be renewed or not.