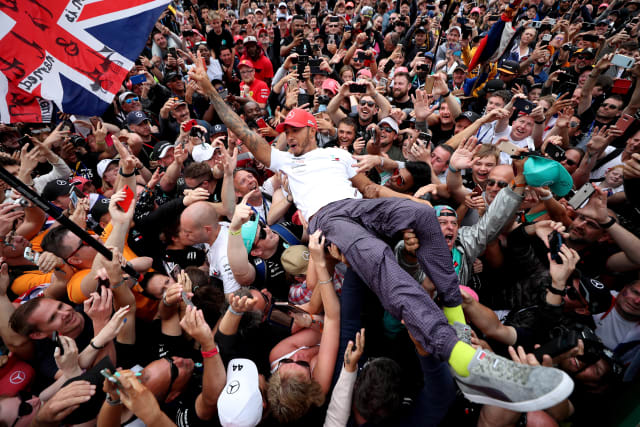 Lewis Hamilton said the absence of fans at the British Grand Prix will cast a shadow over his home race.

But Hamilton’s quest to win his home grand prix for the sixth time in seven seasons will be played out in front of empty grandstands for the first time in the race’s long history.

The Mercedes driver, who moved five points clear of team-mate Valtteri Bottas in the title standings following his dominant win in Hungary, said: “I don’t want to be a Debbie Downer or negative but it is unfortunate.

“I’m just so grateful that we are back at work and all of us here are so fortunate to have our jobs and be able to compete again, but absolutely, the atmosphere without fans is night and day.

“With Silverstone, there is just nothing like it. It is the highlight of my season because the support is insane.

“It grows every year and it’s such an honour and privilege to be able to perform well and win a grand prix in your home country.

“The fans give you that extra lap time because they provide so much energy. It really lifts you up, you’re bubbling, and walking on a cloud.

“I definitely know that the fans who go every year are going to miss it terribly. We did a test there last month and it was so empty. That is what we’re going to experience again but we’ve just got to remain focused and not get distracted or get down by that.”

The British race, on August 2, will be the first of back-to-back rounds at Silverstone. The Northamptonshire circuit is also due to hosting the sport’s 70th anniversary Grand Prix on August 9.

F1 bosses remain hopeful of staging the Spanish Grand Prix a week later on August 16, despite a spike in coronavirus cases in the Catalonia region in recent days.