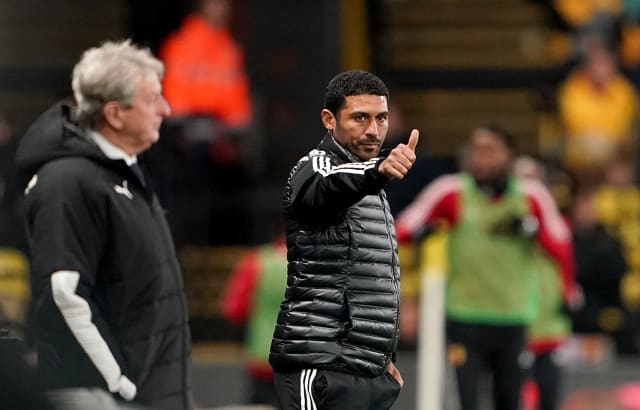 The Hornets, who are 17th in the Premier League and three points above the relegation zone, sacked Nigel Pearson on Sunday after losing 3-1 at West Ham on Friday.

Reports suggested a fight occurred during half-time at the London Stadium, but Deeney shot down those rumours and also insisted he would not be involved in team selection.

“I just want to put it out there, there was no fight at half-time,” Deeney told beIN Sports. “It is 2020, you don’t do that any more and certainly with all the cameras you would see a lot more if that was the case.

“The gaffer didn’t put his hands on anybody. He was just frustrated and had a firm talking to us. No-one was fighting, no-one was punched and no-one was tickled. There were no hands thrown.

“Second of all Troy will not be picking teams because I have read that online as well. I am player-coach apparently. Anything else I have missed out? We wasn’t locked in so a lot of interesting things.”

Hornets top goalscorer Deeney conceded he was surprised Pearson was sacked by the club and yet eager to toe the party line too.

“You get to a point in football where you are not surprised any more, but I would say this one surprised me and took me back a bit,” he added.

“I wasn’t anticipating that was going to be the situation we’d walk into on Sunday. We had an up-and-down week before.

“We won two games (against Norwich and Newcastle) and you’d like to think we would have got a better result against West Ham, but that wasn’t to be and the club made a decision.

Mullins faced the media on Monday and backed up Deeney’s comments regarding Friday’s game at West Ham while also insisting the players are well aware of what is at stake.

He was in charge for fixtures against Leicester and Crystal Palace before Pearson took over in December.

“There were reports about Nigel being over-aggressive and that wasn’t the case,” Mullins said.

“I think the boys expected to get a dressing down at 3-0 and there was nothing out of the ordinary in that at all.

“The players went out early of their own accord because they knew what they had just played was not up to standard, they wanted to put it right. The reports of Nigel being over-aggressive with any players are not true.”

Watford’s interim head coach praised the leadership of skipper Deeney, but also played down talk he will have a larger say on matters than usual.

Mullins, 41, added: “Troy is a leader. He gives a pep talk on the pitch before kick-off. We haven’t asked him or used him in coaching or any of that.

“His sole focus is on playing in the game. He is a fantastic guy and a leader on the pitch, and he is fantastic in that regard.”

Pearson thanked the “well-wishes” of the Watford supporters following his departure and Mullins revealed the pair had been in contact.

The ex-West Ham midfielder also reiterated his focus was on doing everything he could to ensure the club remain in the top flight for next season ahead of games with City and Arsenal this week.

“I texted Nigel yesterday (Sunday) and missed him,” Mullins explained. “He tried to get me back and missed me yesterday evening and left me a voice message. We’ll catch up I’m sure some time. It’s been really busy but we have had brief contact.

“The players know the enormity of the task of the next two games, we need to get some points on the board and we are going to try to do that.”