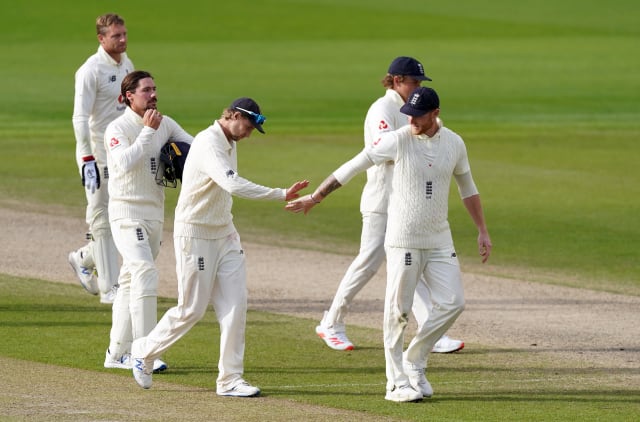 England captain Joe Root says Ben Stokes’ team-mates are “in the presence of greatness” after watching the latest masterstroke from cricket’s very own “Mr Incredible”.

Stokes produced another classic performance to add to his bulging man-of-the-match portfolio, helping his side to a series-levelling win on day five of the second Test against the West Indies.

Having already set up the game with a brilliantly-paced 176 in the first innings, Stokes reeled through his repertoire as England wrapped up a 113-run win at Emirates Old Trafford.

Opening the batting for the first time on the final morning he hammered a fierce 78 not out, ignoring a spread field to club three sixes and four boundaries, buying valuable time lost after Saturday’s washout.

Inevitably he was not finished there. With ball in hand he pounded out almost 15 overs of short-pitched bowling and contributed figures of two for 30, breaking the biggest stand of the day with the last ball before tea, before finally giving way to exhaustion.

“Everyone understands that we are watching a player at the peak of his powers, at the peak of world cricket, who is delivering time and time again,” said an awed Root.

“He just seems to get better and better. I feel lucky, I don’t know what else to say. We have to savour that, appreciate that and we have to understand that we are – without wanting to pump his tyres too much – in the presence of greatness.

“He’s a genuine all-rounder player, something you don’t see much in world cricket. You get guys who have certain strengths and favour batting or bowling, but he’s someone you can genuinely turn to any time and he’ll change you a game.”

Root had earlier hailed Chris Woakes as the squad’s ‘Mr Dependable’ for his under-the-radar performance, which saw him finish with five wickets in the match to reach 100 Test wickets in just 34 caps.

Asked if he had a similar title in mind for Stokes, Root barely hesitated before answering: “He’s Mr Incredible! He probably looks a bit the like the cartoon character too,” he said, referencing Pixar’s square-jawed superhero.

“He’s a similar shape, but probably a bit skinnier than him now. Mr Incredible suits him, I reckon. He’s just getting better and better. The sky is the limit for him.”

Superheroes do not tend to pick up niggles, of course, and Stokes was quick to brush off the discomfort which forced him to abandon his final over after four balls.

England’s chances of winning the series 2-1 at the same venue would plummet should he be injured, but he explained: “It was just my body starting to get really stiff. I’m fine.

“I’ll give everything to the team, whatever is asked of me.”

Stokes continues to do just that – be it the World Cup final, a lost Ashes cause at Headingley or another day-five finale in Cape Town at the turn of the year. He carries a huge burden of expectation now but seems happier than ever with the load.

“It’s a case of doing what’s needed at the time,” he said with typical understatement. “I’ll always try to do whatever is needed.

“I’ve been round a long time now and I have that understanding, of the role models we are. We want to pave the way for England cricketers in 20 years’ time. It’s not all about the present, it’s about taking the cap forward.

“Hopefully that motto – taking the cap forward – is still there in 20 years. We’ve a duty to win games but also to youngsters who want to aspire to be like us.”