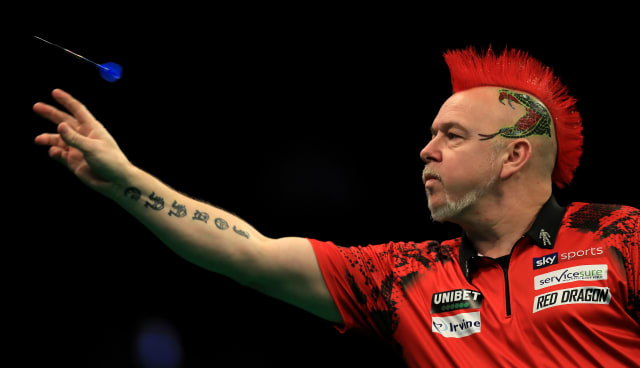 World champion Peter Wright took off his glasses and never looked back as he secured a place in the last 16 of the PDC World Matchplay – but holder Rob Cross crashed out on the second night of action in Milton Keynes.

The event was moved from Blackpool’s Winter Gardens to behind closed doors at the Marshall Arena because of the coronavirus pandemic.

While there was a lack of the traditional vocal reception from the crowd for the world champion, ‘Snakebite’ – winner of the final Summer Series event last week – tried to make the most of the surreal environment as he danced onto stage.

However, the world number two soon found himself in trouble against debutant Jose De Sousa, who moved 6-4 ahead as Wright struggled to find a finish going into the second interval.

After then trailing 8-5, Wright decided to remove his glasses, which he had worn at the previous PDC event because of different lighting conditions, and was soon back on form with a 144 check-out to cut the deficit to one leg.

Wright maintained his momentum to take the lead for the first time at 9-8 before sealing match darts on double top after De Sousa missed a chance to force the tie-break.

Cross, though, became the first defending World Matchplay champion to exit in the first round since 2006 as he was defeated 10-8 by German Gabriel Clemens, another making his competition debut.

The 2018 world champion failed to find any consistency as Clemens landed 55.56 per cent of his check-out chances – including a 170 – to secure his biggest tournament scalp.

Earlier, Glen Durrant, the three-time BDO world champion, coasted past Dutchman Jeffrey De Zwaan 10-3 with a 106.93 average to book his place in the last 16.

Smith averaged 101 and landed a 63 per cent check-out ratio as he saw off the world number 20.

In Sunday’s opening first-round encounter, Mensur Suljovic, the 2018 World Matchplay finalist, had edged out Jamie Hughes 12-10 after a tense tie-break.