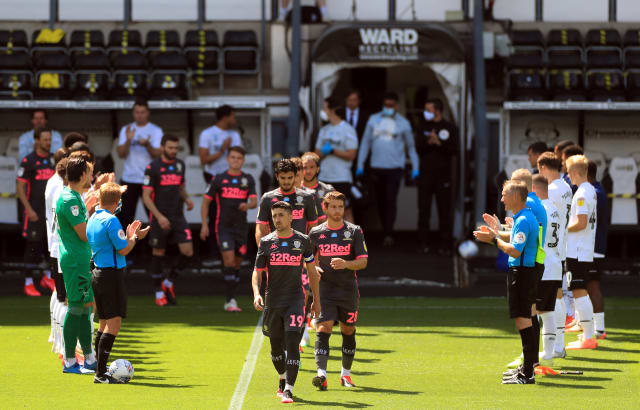 Here, the PA news agency looks at some of the best examples from July 19.

Leeds made light of last season’s “Spygate” affair as they returned to Derby for the penultimate game of the Championship season.

Liverpool’s Georginio Wijnaldum is keen to get his hands on the Premier League trophy.

Crystal Palace full-back Patrick Van Aanholt is optimistic of returning for the start of next season after surgery on a dislocated shoulder.

Leicester thanked fans for their ongoing support during the Covid-19 lockdown.

Former Manchester United forward Memphis Depay is pleased to be back on the field for Lyon as they took on Celtic in a friendly.

Keep an eye out for the next generation of Bell in the England side in years to come.

And Bell’s former England captain Michael Vaughan was quick with a quip.

Mercedes’ Valtteri Bottas was prepared for battle in Hungary.

While Ferrari’s Sebastian Vettel was considerate in the pre-race rain.

Red Bull’s mechanics were forced into a race against time after Max Verstappen crashed on his way to the grid.

And they succeeded in getting the Dutchman ready for the start.

But it ended prematurely with smoke pouring out of his car.

Luke Campbell was hard at work.

Brendan Dolan rued missed chances after he was beaten by world number one Michael Van Gerwen on the opening day of the World Matchplay.