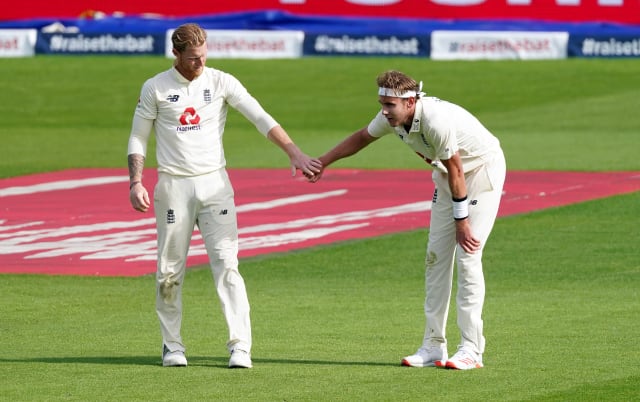 Stuart Broad says England will be ready to “take a risk” to give themselves the best chance of pushing for victory on the final day of the must-win second Test against the West Indies.

England were on the wrong end of an exciting day five finish in the series opener and know they must come out on the right side of the equation at Emirates Old Trafford if they are to keep alive hopes of reclaiming the Wisden Trophy with a 2-1 scoreline.

Despite the best efforts of Broad, who took three wickets for one run in a heady spell of new ball bowling on the fourth evening, the tourists avoided the follow-on in Manchester.

A 182-run first-innings lead would still have plenty in ordinary circumstances but having lost an entire day to rain, time pressure has altered the picture.

A hasty revision of the batting order was testament to that, openers Rory Burns and Dom Sibley stood down in favour of England’s Super Over specialists Jos Buttler and Ben Stokes in a late hunt for runs.

It was a brief experiment, Buttler bowled for a duck by Shannon Gabriel, but a lead of 219 with Stokes and Joe Root at the crease still represents an intriguing situation.

And Broad, for one, expects England to keep taking risks – certainly with the bat and possibly with the declaration mark.

“We want to make this series 1-1 as quickly as we can and with the time that has gone out of the game because of weather, we might have to take a risk,” he said.

“I think we want a minimum of 270. We should be able to defend that on this pitch, but they are dangerous players. It’s going to be a great Test match. I think we will dangle a carrot and all results will be possible, but we’ll have to bowl pretty badly to lose it.

“It would have been great to enforce the follow-on and we probably left ourselves too much to do but we certainly made that second new ball talk and that’s encouragement for us. It really makes us want two new balls if we possibly can. If we get 85 overs at them, that would be dream world really.”

Broad is shaping up to be a key figure having located his killer line and length after feeling his way into the match.

Having been stung by his omission from the first Test he had promised to show his class at the next time of asking, a vow he has already partially delivered on.

“I haven’t felt like I wanted to prove a point. I don’t think there’s any point to prove,” he said.

“I genuinely didn’t feel like I had to prove anyone wrong. I’ve done all that talking on the field, but I felt quietly – or maybe not that quietly – that when I got the chance again I needed to be in the best place to perform.

“I really enjoyed that spell, that’s where I’m at my best, when it’s time to make something happen and there’s encouragement from the pitch.”