Lewis Hamilton living the dream with another impressive pole in Hungary 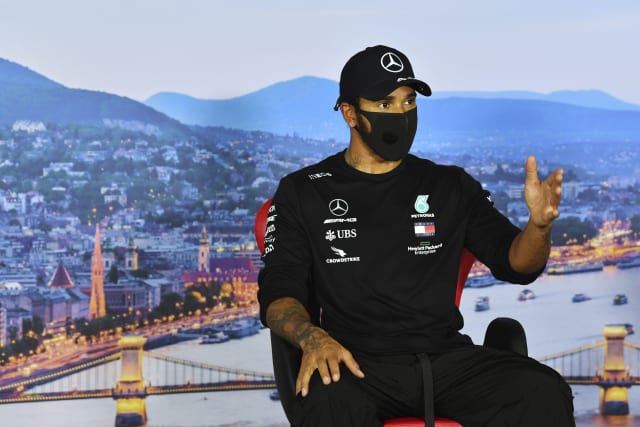 Lewis Hamilton said he was in dreamland after claiming the 90th pole of his remarkable career in a year where he now looks increasingly likely to match Michael Schumacher’s championship record.

Hamilton produced another of his magical laps to set a new track record and beat Valtteri Bottas by 0.107 seconds as the all-conquering Mercedes team locked out the front row for Sunday’s Hungarian Grand Prix.

The 35-year-old Briton enjoys a remarkable record at the twisty Hungaroring venue. This was his seventh pole at the venue and on Sunday he will go in search of his eighth win to equal Schumacher’s record for the number of triumphs at a single track – the German having won on eight occasions at Magny-Cours in France.

Hamilton, who is just one championship short of Schumacher’s all-time tally, will also move to within five victories of his win record if, as expected, he takes the chequered flag on Sunday.

But over one lap, Hamilton is the sport’s undisputed maestro. He is now 22 poles clear of Schumacher and 25 ahead of his hero Ayrton Senna in the pantheon of qualifying greats.

“I have to pinch myself because it just doesn’t register. It is quite humbling to be honest.

“Valtteri doesn’t make it easy for me at all and it requires absolute perfection when it comes to doing the laps, and qualifying when it is like that, is one of the things I enjoy most.

“I have been living my dream since I started in Formula One and I am still living my dream today. It just doesn’t feel real. But what I have to continue to remind myself is that every single weekend I have to deliver. I can’t just show up and win.”

Such is the dominance of Hamilton’s Mercedes machine, however, he is likely to have just one true rival, team-mate Bottas, for Sunday’s victory.

Hamilton, who trails Bottas by six points in the standings, lapped the best part of a jaw-dropping one second clear of third-placed Lance Stroll in his Racing Point – a car which has been nicknamed the “Pink Mercedes” following its similarities to last season’s championship-winning Silver Arrows.

Sergio Perez finished fourth in the second Racing Point, while the Ferrari duo of Sebastian Vettel and Charles Leclerc lined up in fifth and sixth respectively – the red cars a demoralising 1.3 and 1.4 sec off Hamilton’s pace.

It was even worse for Max Verstappen – the Dutchman billed before the season as the greatest threat to Hamilton’s quest for another title – finished further back in seventh.  His Red Bull team-mate, the London-born Alexander Albon, lines up a miserable 13th.

“I definitely wasn’t expecting Red Bull to be as off as they have been this weekend,” added Hamilton. “That’s a big, big gap.”

Lando Norris will start eighth for McLaren, while for the second week in succession, George Russell was the standout performer in the opening phase of qualifying.

“That’s a lap, that’s a lap,” he said over the team radio after comfortably making it through to Q2.

The Mercedes junior driver, who this week confirmed he will remain at Williams next year, finished 12th. Russell’s rookie team-mate Nicholas Latifi also made it through to Q2, to ensure both Williams cars progressed from Q1 for the first time since the Italian Grand Prix in 2018.  It was a boost for the British team who have been on a downward spiral for the past few seasons.

On an afternoon to forget for Kimi Raikkonen, the 2007 world champion and most-capped driver on the grid, will line up in last position for Sunday’s race.