Brentford let West Brom off the hook after losing at Stoke 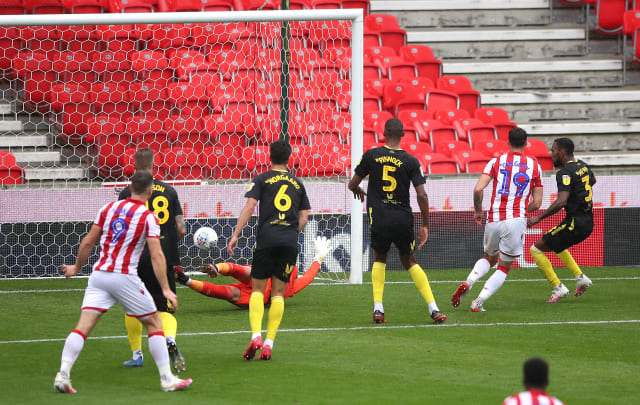 Brentford missed the chance to move into the Championship’s automatic-promotion places as their eight-match winning run came to an end with a 1-0 defeat at Stoke – a result which handed the title to Leeds.

Avoiding defeat would have seen the Bees replace West Brom in second spot ahead of Wednesday’s final round of fixtures.

But Lee Gregory’s close-range finish in the 38th minute, on the follow-up after David Raya parried an effort by Sam Clucas, proved the only goal of the game as Stoke’s safety was sealed.

Bryan Mbeumo was denied by Potters goalkeeper Adam Davies prior to Gregory’s finish, and Josh Da Silva shot wide of the hosts’ goal just before the hour mark.

Substitute Emiliano Marcondes and Ethan Pinnock subsequently had strikes saved by Davies late on as Brentford continued to endure frustration.

Thomas Frank’s men remain a point behind West Brom in third spot. They host rock-bottom Barnsley on Wednesday, while the Baggies take on QPR at the Hawthorns.

Leeds, whose promotion was already confirmed following Albion’s 2-1 loss at Huddersfield on Friday, are now uncatchable at the top, sitting five points clear.

Meanwhile, the win for Michael O’Neill’s Stoke in their last home match of the campaign left them eight points above the relegation zone in 17th.

After a low-key start to the contest in pouring rain, the first real goalscoring opportunity arrived in the 17th minute when Said Benrahma sent a cross towards the far post and Mbeumo’s header was well saved by Davies.

Three minutes later Brentford were on the attack again, with Ollie Watkins heading wide, before Sam Vokes nodded over the bar at the other end.

Pinnock went down in the Stoke box under pressure from Bruno Martins Indi, but nothing was given by referee Geoff Eltringham.

Having kept their opponents fairly quiet, Stoke then grabbed the lead as Raya’s parry from Clucas’ strike left a simple tap-in for Gregory.

Rico Henry fired off target in the opening moments of the second half, before decent chances were passed up by both sides, with Vokes directing a header wide and Da Silva then prodding the ball the wrong side of the post.

Watkins subsequently saw an attempt blocked by Danny Batth, and as the clock ticked down, Brentford’s efforts to rescue something continued to be in vain, with Marcondes sending a free-kick over the bar and then seeing a shot pushed behind by Davies.

Another substitute, Sergi Canos, sent a delivery across the danger zone in stoppage time but Benrahma was unable to get on the end of it, and Davies then produced another good save to keep out Pinnock’s strike.