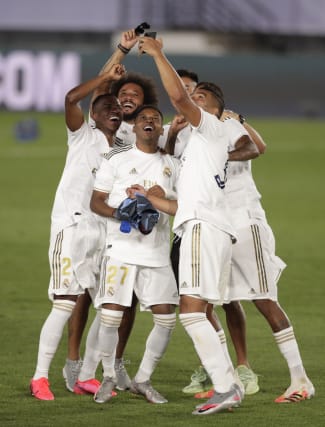 Here, the PA news agency looks at some of the best examples from July 17.

…while Toni Kroos indulged in a champions’ dinner.

Elsewhere, Rio Ferdinand looked back on his reactions during Manchester United’s victory over Crystal Palace.

Manchester City defender Benjamin Mendy was feeling the love on his birthday.

Shortly after the lunch break, Vaughan took to Twitter again to hail Ben Stokes after he also passed 100 runs.

Headingley looked a picture ahead of the return of county cricket.

Ferrari driver Charles Leclerc remembered Jules Bianchi on the fifth anniversary of his death with a throwback photo.

Max Verstappen was looking forward to testing himself at the Hungaroring.

Lewis Hamilton was quickest in first practice but did not set a time in the rain-affected second session.

Michael Van Gerwen was raring to go ahead of the World Matchplay.

As was Glen Durrant.

Wimbledon preparations have already begun for next year’s event.