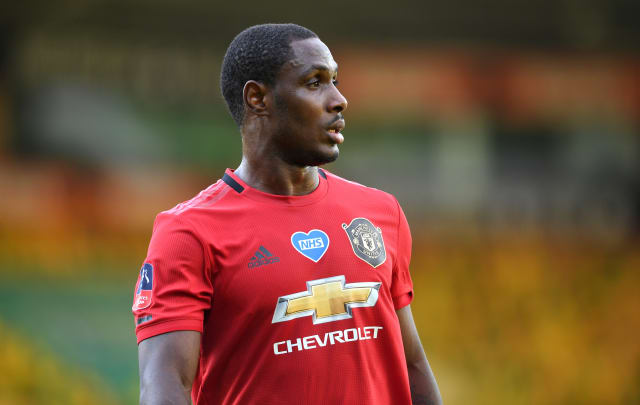 Boyhood Manchester United fan Odion Ighalo has set his heart on reaching the FA Cup final with the club.

United take on Chelsea in the semi-finals at Wembley on Sunday and the Nigerian striker is desperate to mark his loan spell at the club by reaching the competition’s showpiece fixture.

“To get to the final would be great for me in my life and my career,” Ighalo, who was on the losing side for Watford in the semi-finals four years ago, told the club’s official website.

“It would make my dreams perfect. It will be tough, but we have what it takes.”

Ighalo’s loan deal from Chinese Super League side Shanghai Shenhua has been extended to January 2021 and he said he has unfinished business after his previous Wembley appearance with Watford ended in heartache.

“It was a difficult one to take against Crystal Palace, we lost 2-1 at Wembley,” he said.

“If we’d have won, we’d have played United in the final. Unfortunately, we lost. It was a bitter one to take, but this is an opportunity again in an FA Cup semi-final to make it right and go forward to the final.

“If I’m called to play, I’m going to give all I can to help the team win the game.”

Ighalo has scored five goals in 14 appearances since arriving at Old Trafford in January but has had to settle for a place on the bench in recent weeks following the return to fitness of Marcus Rashford.

“We train hard to keep fit and I’m always ready when I’m called upon, and I will give 100 per cent. You always have to stay focused.”

United have beaten Chelsea in each of their three meetings this season, winning 4-0 at home in August and 2-0 in February at Stamford Bridge, where they also won 2-1 in October in the Carabao Cup.

“All those games don’t count though,” Ighalo added. “This is a different game which is going to be even tougher without the fans in stadium.

“We have to fight from the first minute until the end. It’s always tough against them, but I think, with the quality and momentum we have now, we are ready to go and to win against any team.”