Mikel Arteta insists his relationship with Arsenal’s hierarchy is healthy 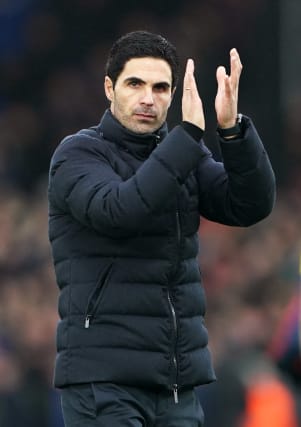 Arsenal head coach Mikel Arteta insists he has “full faith” in the club’s hierarchy and that he has not been sending them messages about finances during recent media interviews.

Speaking after the 2-1 victory over Premier League champions Liverpool on Wednesday night, Arteta admitted it is a “big concern” that he may not be given the finances to mount his own title challenge.

The Gunners have seen their coffers take a hit in recent years as they prepare for a fourth season out of the Champions League.

Also affected by the coronavirus pandemic, Arsenal may even find themselves without Europa League revenue as they sit ninth in the table with two games remaining – as well as Saturday’s FA Cup semi-final meeting with Manchester City.

Speaking in April, director Josh Kroenke said the club are currently operating a “Champions League wage bill on a Europa League budget” – not helped by the fact players like the out-of-favour Mesut Ozil are earning a reported £350,000 a week.

Former double-winning Arsenal captain Tony Adams hit out at the pair in a talksSPORT interview on Friday morning, claiming they were “out of their depth” at the Emirates Stadium – but they were backed fully by Arteta.

“I have a really good relationship with Raul, with Edu, with Vinai (Venkatesham, managing director) and direct contact with the owners.

“We know what we want to do. That’s not the issue, for sure.

“We don’t know the type of transfer market we are going to find. It is something unique, it never happened and there are a lot of question marks around that.”

Arteta also revealed he is in regular contact with owner Stan Kroenke and that his questioning of financial options moving forward was not meant as a veiled warning to the club.

“That was misinterpreted. It wasn’t my intention,” he said when asked if he was sending a message with his comments.

“We work so closely with everyone at the club, with the owners to put the plan that we need to take the club forward. Everybody has the same ambition, we are in all of this together.

“But if you ask me if I know right now what do I have and how can I do it, I’m sorry but I don’t know because there are a lot of questions that we cannot resolve right now with the situation we have.

“One is financially and the other one is because we do not know if we are in Europe, and because we have players that we don’t know what’s going to happen (with). That’s the reality.

“I speak with them (Kroenke and the directors) and I have a really, really good and open relationship, that’s why when you mention that I am surprised because I don’t need to do that.

“I can make a phone call and speak to them and they have been very, very supportive from the first day that I joined the club and they were very much participating in the decision to bring me back here – and the same with Raul and Vinai and Edu. There are no gaps or friction or anything there.”