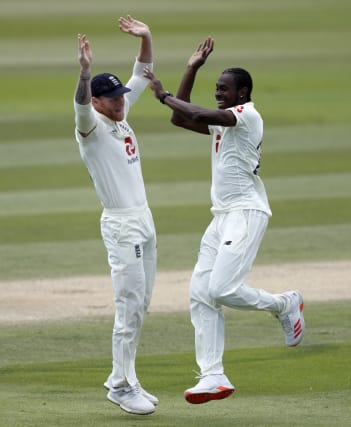 Ben Stokes took a leading role for England on and off the pitch on day two of the second Test against the West Indies, hitting a fine 176 then offering his full support for team-mate Jofra Archer.

Stokes’ 10th Test century was further evidence of his maturity in the middle, a perfectly-paced knock that saw him grind down the tourists alongside the stoic Dom Sibley, who made 120, before opening up after reaching three figures.

It allowed England to declare on 469 for nine, and left just enough time for Sam Curran to prise out John Campbell before the close, but he also spoke in impressively measured tones about Archer’s ongoing travails.

The paceman has spent the last two days isolating in his on-site hotel room at Emirates Old Trafford after an unauthorised trip to Brighton breached the team’s bio-secure bubble and faces further disciplinary action this week.

Archer’s lapse, which only came to light late on the eve of the match, caused disbelief and frustration in the England camp but Stokes insisted he now needed support from his team-mates.

“We really need to be there to support Jofra right now,” was his instant reaction to Archer’s period of solitude.

“Obviously he’s a big talking point and he is by himself because of everything else going on at the moment.

“It’s making sure that it doesn’t feel like he’s by himself. The worst thing we could do right now as a team is just leave him and see him in five or six days time.

“It’s all good being there for people when things are going well and smoothly but what really comes through is how you operate with someone when they need you the most.”

Stokes made no reference to the difficulties he has experienced in his own career, which include missing an entire Ashes tour while an ultimately discarded charge of affray hung over him, but he knows better than most what it feels like to be at the eye of a storm.

“At times like this people are very, very tough and you can feel like you are all by yourself, but I don’t think anybody is going to allow that to happen,” he said.

“Jofra’s a massive part of this group, as everybody is. If it was anybody else bar Jofra it would be exactly the same.”

Stokes was speaking after his second highest score in England colours, an outstanding all-round batting display that included 17 fours and two sixes but also long periods of deep concentration.

He and Sibley added 260 for the fourth wicket, well over half the team’s total runs in one partnership, but he took his share of the work in his stride.

“Numbers, figures…I don’t really care. The main number for me is how many wins,” he said.

“I was more buzzing that I faced 300 balls than I was when I got to my hundred, that’s something I never thought I’d be capable of doing. The more time you spend in the middle the more chance you’ve got to get runs.

“Being an instinctive player is great but there’s time in the past where I’ve let how I’m playing at the time affect me, thinking I can play some big shots and I’d be alright.

“I feel at an age and an experience level where I really understand my game pretty much all the time and I try not to get carried away.”

Sibley, who set the tone for unfaltering diligence by batting for 372 balls at the head of the innings, was rewarded with a second hundred in England kit and first on home turf.

“Sometimes you think maybe after you get one it might be a bit of a fluke but to get two is a great feeling, and obviously it put us in a good position in the Test,” he said.