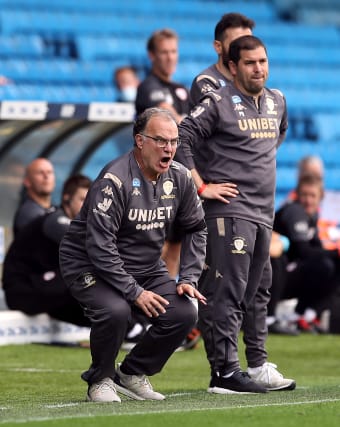 Marcelo Bielsa has targeted the Sky Bet Championship title after watching his side edge closer to automatic promotion with a nervy 1-0 win against Barnsley.

The gap to third-placed Brentford is six points and if they and West Brom both fail to win at the weekend, Leeds will go up as champions before their next match at Derby on Sunday.

When asked if promotion was the only objective or if he wanted to win the title, the Argentinian said smiling: “This question has only one answer.”

Otherwise, Bielsa maintained his refusal to discuss the prospect of life in the Premier League.

“We are not yet promoted and until we can resolve this problem mathematically, we cannot talk about this,” he said.

Leeds can count themselves lucky to take all three points after being pushed all the way by their local rivals.

The Reds had plenty of chances to cause a mighty upset. Jacob Brown and Mads Andersen went close to opening the scoring in the first half.

In the second period, Conor Chaplin and Callum Styles both fired shots narrowly wide, while Barnsley goalkeeper Jack Walton pulled off an excellent save to deny Patrick Bamford.

Bielsa said: “I want to recognise the work of our opponent today because they tried in every way possible and possibly deserved a different result.

“That is the comment I made (to Barnsley manager Gerhard Struber) at the end.

“It was a very tough match according to the mental balance. It was difficult for us to defend and attack.”

Leeds winger Helder Costa was carried off the field on a stretcher and Bielsa confirmed he had sustained a rib injury.

Bielsa said he would not be watching either West Brom or Brentford’s next matches.

“No, we always think that what we are able to get depends on us,” he added.

Barnsley boss Struber said he was proud of his players’ display, but that his side needed points and not performances in their bid for survival.

“But the killer thing is to score goals and that’s the key issue at the moment.

“I’m very proud of my players for this performance, but in our situation we need to pick up points.”

Struber insisted his players still had everything to play for and would fight to the end.

“It’s a young group and many players will never give up,” he added.

“We will keep going and in these last two games we still have a chance to stay in the league.”