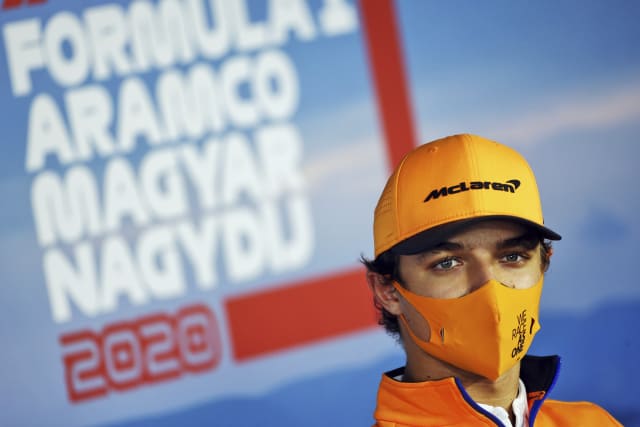 Lando Norris has revealed he flew back to the UK to see a specialist in a bid to prove his fitness for this weekend’s Hungarian Grand Prix.

The 20-year-old McLaren driver sits third in the Formula One world championship after a mightily impressive start to the new season.

But his last outing at the Red Bull Ring in Spielberg was plagued by both chest and back pains.

Norris left Austria for London after the race last Sunday in a bid to resolve the issue.

After undergoing a series of scans, he arrived in Budapest on Wednesday evening for the final round of three successive races.

“I went back to the UK, staying in my bubble, to see a specialist for a scan,” said Norris. “We diagnosed the problem and I’m feeling better for this week, which is a very good thing.

“It was bruising from being out of the F1 car for so long – and then getting back into it, straight into a race weekend, and doing so many laps.

“It’s not something that is going to heal completely overnight, but I’m much better than last weekend.

“I couldn’t really prepare for or know about it until after we did the first race because it hit my body a few days later and I was a bit bruised.”

Norris was on painkillers for the Styrian Grand Prix but managed to drive to fifth from ninth on the grid – passing three cars on the final two laps – including Racing Point’s Sergio Perez at the final bend.

His performance came a week after he finished third in the season opener at the same venue, eclipsing Lewis Hamilton as the youngest British driver to stand on a grand prix podium. He is behind only the Mercedes duo of Valtteri Bottas and Hamilton in the standings.

Russell, 22, is on the books at Mercedes as a junior driver, and while the Silver Arrows are yet to confirm their line-up for 2021 it seems likely that they will retain Bottas alongside Hamilton.

“I signed a three-year deal with Williams and I will be staying for 2021 to build off last year and this,” said Russell on Thursday.

“[Deputy team principal] Claire Williams was very firm in her decision that she was not ready to let me go.

“I will be giving everything for Williams and we will see what happens after that.”

Nick Gubbins removed from Middlesex match due to coronavirus risk