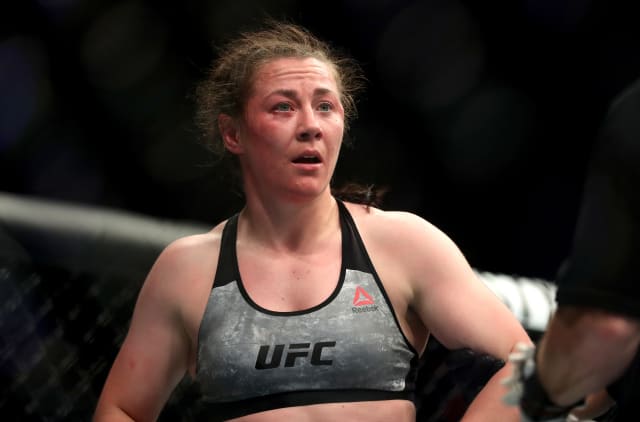 British duo Jack Shore and Lerone Murphy won on the preliminaries of the latest UFC ‘Fight Island’ event but Liverpool flyweight Molly McCann was outpointed by Brazil’s Taila Santos on the main card at Abu Dhabi.

The Welshman locked in a rear-naked choke midway through the second round, leading to his 13th successive win and second in the UFC after defeating Nohelin Hernandez in identical fashion in his debut with the company last year.

“It feels very good, the fans of this sport want to see finishes, they don’t want to see drawn out decisions and I’m not the type of guy that wants to be in three rounds wars,” he said.

Murphy bagged his first win in the UFC after stopping Brazil’s Ricardo Ramos towards the end of their featherweight clash, the Londoner raining down a series of unanswered right hands to force the referee’s intervention.

Murphy, now 9-0-1 in MMA, said: “I wanted to prove that I belong here in the UFC. I plan to spend the rest of my career in the UFC, climb to the top, get into that top 15 and obviously one day be champion.

“I’m just going to go back, heal up for a month and then get back to training and grow and grow.”

It was a night of mixed fortunes for British fighters, though, as McCann, fellow Liverpudlian Chris Fishgold and Wales’ John Phillips all suffered defeats.

McCann was on a three-fight winning streak and opened up a cut above her opponent’s left eye but Santos’ superior work-rate led to her winning all three rounds on the judges’ scorecards.

Fishgold dropped a unanimous decision to American opponent Jared Gordon, a fight that was held at a 149lb catch-weight after the British fighter failed to make weight.

Phillips was submitted by Swedish middleweight Khamzat Chimaev in the second round, but British-based Lithuanian light-heavyweight Modestas Bukauskas overcame Andreas Michailidis, with the referee ruling the Greek was in no position to continue after the hooter sounded to end the first round after being on the end of a series of elbows.