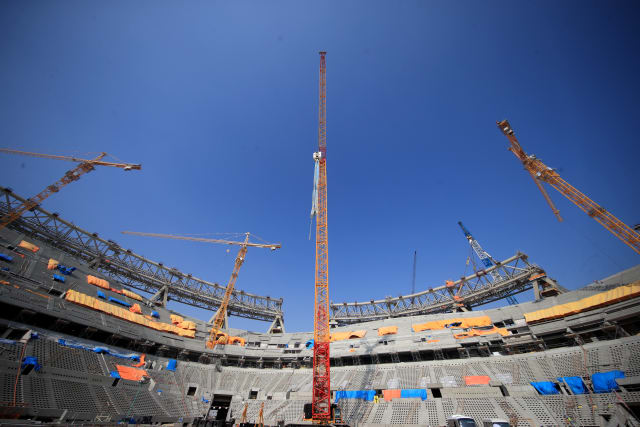 Four matches will be played each day during the group stage of the 2022 Qatar World Cup, FIFA has announced.

The group games will be played over a 12-day period, with matches not being assigned to particular venues until after the finals draw in March 2022 in order to choose optimal kick-off times to suit television audiences in different countries as well as supporters out in Qatar.

Kick-off times for the first two rounds of matches will be 1pm, 4pm, 7pm and 10pm local time, and with the stadiums all within a 40-mile radius of each other it will enable supporters and media to realistically attend two games on the same day.

For all but three games there will be a three-day rest period in between. There will also be no need for teams, supporters or media to spend time flying or taking long rail or road journeys between matches.

Kick-off times in the final round of group games and knock-out round matches will be at 6pm and 10pm local time.

The tournament’s opening match will be played at the Al Bayt stadium in Al Khor on Monday, November 21 in a match which will feature the host country.

The 2022 final venue is the Lusail Stadium in Doha, with the showpiece game to be played on Sunday, December 18.

A start date has not yet been fixed for the European section of World Cup qualification. The announcement comes two years to the day since the 2018 World Cup final.

Meanwhile, a report to the UN Security Council has highlighted the continued existence of “structural racial discrimination against non-nationals” in the country’s construction sector.

Around two million migrant workers are involved in helping to build World Cup venues and other tournament-related infrastructure.

The local organisers, the Supreme Committee for Delivery and Legacy, employ around four per cent of construction workers in the country and were commended by the report’s author on the measures and safeguards they had implemented in relation to timely and reliable payments and living conditions.

However, workers’ representatives still called for there to be non-discriminatory minimum wage protections and more liberal immigration rules.

The Supreme Committee were praised for their work on safety, but the remaining 96 per cent of the construction industry was deemed to have failed to reach the required standard, and the report called on the national government to take urgent action.

FIFA said in a statement: “Ms Achiume, who visited a stadium construction site in November 2019, characterises these measures as ‘impressive changes’ and ‘sweeping reforms’ implemented for FIFA World Cup workers and calls for these heightened standards to be expanded to benefit all workers in the country.

“FIFA supports that recommendation and is working with its partners to expand the systems developed for construction workers to other sectors directly linked to the FWC 2022 tournament as the preparation for the event advances.

“FIFA will continue to work with its partner the Supreme Committee for Delivery and Legacy and other entities in Qatar and worldwide to further promote a positive human rights and environmental legacy of the event.

“These efforts include, besides the protection of workers’ rights, and innovative environmental solutions, a strong commitment to an inclusive tournament experience for all and a firm stance against discrimination of any kind.”