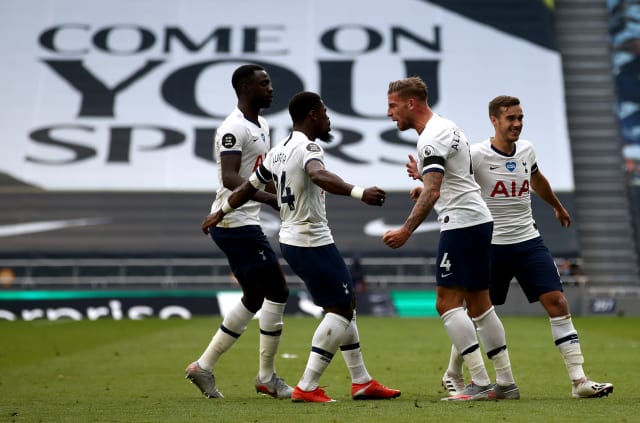 Spurs had to beat the Gunners to keep themselves in the race for Europa League qualification and Toby Alderweireld’s 81st-minute winner did the job.

Arsenal had gone in front through a superb Alexandre Lacazette strike on 16 minutes, but a defensive howler allowed Son Heung-min to level within three minutes.

It was heading for a draw until Alderweireld headed home to seal the points which lifted Spurs above Arsenal in the table and ensured Jose Mourinho remained unbeaten against the Gunners at home in the Premier League.

All eyes will now be on whether Manchester City’s European ban gets overturned on Monday as that has implications for both sides in north London and their hopes of qualifying for Europe.

Spurs are currently in eighth – a position which would be enough for Europa League qualification if City are not allowed to compete in next season’s Champions League – two points above the Gunners.

As well as putting them back in the race, this is a win that goes some way to lifting the spirits at the club and Mourinho will be pleased with the reaction after a dismal draw at Bournemouth on Thursday.

Arsenal will realistically have to take nine points from games against Liverpool, Aston Villa and Watford as they came away with nothing to show from a game they dominated for large periods.

Spurs were so bad against Bournemouth that they failed to force a shot on target against a side who had conceded nine goals in their last two games, but they needed only 15 seconds to improve on that here.

It was a sign of the positive start they made as Lucas Moura tested Emiliano Martinez from distance in the first action of the game.

Moura, in a wide left position, then almost teed up an opener for Spurs as he played Kane in with a fine cross, but the England captain could not lift the ball over Martinez’s outstretched arms.

Arsenal had been sluggish, but a moment of brilliance sent them into a 16th-minute lead.

Spurs right-back Serge Aurier over-ran the ball and put in a weak tackle, allowing Lacazette to advance with the ball and thunder a right-footed shot into the top corner from 20 yards.

But just two minutes and 17 seconds later the advantage was wiped out after some terrible defending by Sead Kolasinac.

The defender painfully misplaced a pass to David Luiz, who could not react and Son nipped in, advanced on goal and clipped home beautifully.

Only a fine save by Martinez kept Arsenal level on the half-hour as the Argentinian acrobatically tipped Ben Davies’ fierce shot on to the crossbar.

From then on Arsenal began to take control, finishing the first half with efforts from Nicolas Pepe and Pierre-Emerick Aubameyang that went off target.

That carried on after the break and the Gunners were inches from regaining the lead as they hit the woodwork just before the hour mark.

A nice move saw Aubameyang played in at the far post and the Gunners captain thrashed an effort that hit the crossbar.

The Gabon striker again went close as the ball found its way to him at the back post but his first-time effort, which was bending its way into the bottom corner, was tipped around the post well by Hugo Lloris.

Finally Spurs came to life after the break and Moura set Kane free with Martinez again denying the Spurs striker with a smart save.

But it was from the resulting corner that the hosts took the lead as Alderweireld met Son’s delivery and and sent a glancing header into the far corner.

With Arsenal chasing the game, Spurs had chances to kill it on the counter-attack, but Kane was again kept out by Martinez while Son chose not to pass to his team-mate when Kane would have had a tap-in.