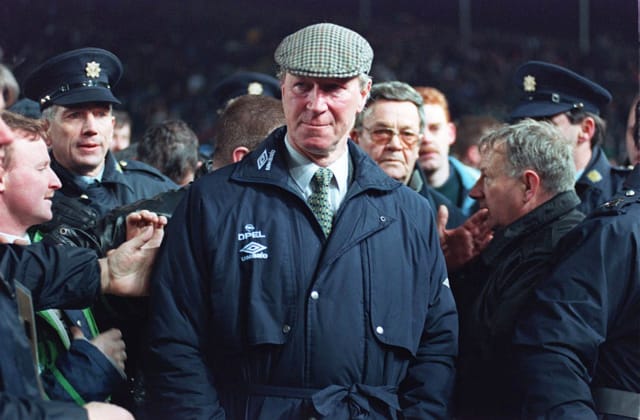 Jack Charlton should have been knighted after helping England win the 1966 World Cup, according to former Liverpool and Republic of Ireland midfielder Ray Houghton.

Charlton, who later handed Houghton his international debut in his first match in charge of Ireland against Wales in March 1986, died on Friday aged 85, his family announced in a statement.

Jack Charlton, the former Leeds and England defender who won a World Cup winner’s medal in 1966, has died of lymphoma aged 85. Charlton, diagnosed with lymphoma in the last year, had also been battling dementia. He spent his entire 21-year playing career at Leeds, making a joint club record 773 appearances, before retiring as a player in 1973 and going on to enjoy a successful and colourful career as a manager.

As tributes poured in from his former clubs and the Premier League announced black armbands will be worn by players at all matches this weekend, Houghton labelled Charlton a "legend" after winning a clutch of honours with Leeds as a player and helping the Republic qualify for the 1990 and 1994 World Cups and Euro 1988.

But while younger brother Sir Bobby was among a number of England stars to receive knighthoods in the years after they lifted the Jules Rimet Trophy, Jack did not, which left Houghton incredulous.

"He was a larger than life character," Houghton told talkSPORT.

"The word legend is used too much in football but not for Jack, for what he's done domestically with Leeds, winning the World Cup, which he should have been knighted for, I've still never understood that, I think that's an absolute disgrace and the fact that he did so well with Ireland.

"He changed everything about Irish football because there was a stage where we hadn't qualified for tournaments, we had some great players and very good managers but didn't quite get over the line.

"Jack came in and changed that mentality, got us through two World Cups and one European Championship. His legacy within Ireland is absolutely huge."

Mick McCarthy was appointed Republic captain by Charlton and went on to succeed the former defender as manager of the national side in 1996.

"It's a real shock that he's passed away and I'm very, very sad," McCarthy told talkSPORT.

"It was the happiest time of my career, he made it simple for me and I'll always remember him for that.

"I wasn't the best player in that team, nowhere near. But he saw something in me and I'll never forget him for that."

John Aldridge, Houghton and McCarthy's former Republic team-mate, tweeted: "Absolutely gutted that Big Jack has passed away! What a football man, loved and adored, specially in Ireland. The best manager I was lucky to play for.

"The times we had on and off the pitch were priceless! My thoughts are with (wife) Pat and the family! RIP my good friend. Never forgotten!"

The Premier League announced players will wear black armbands and there will be a minute's silence in all matches this weekend in tribute to Charlton.

Former England striker Gary Lineker tweeted: "Saddened to hear that Jack Charlton has passed away. World Cup winner with England, manager of probably the best ever Ireland side and a wonderfully infectious personality to boot. RIP Jack."

Charlton started his managerial career at Middlesbrough in 1973 and is still revered on Teesside after leading the club into the old first division as champions in his four-year stint.

A Boro spokesman said: "Middlesbrough FC are saddened to hear the news. Jack was a true gentleman and was liked by everyone who met him.

"He had a great playing career and was a very successful manager, particularly at Middlesbrough, where he guided us to promotion in 1974.

"Our thoughts are with Jack's family and friends. He was a great football man and he will be sorely missed."

Charlton also had a spell in charge of Newcastle, who tweeted: "We are deeply saddened to learn of the passing of former #NUFC manager and England World Cup winner, Jack Charlton at the age of 85. RIP, Jack. A true legend of the game."