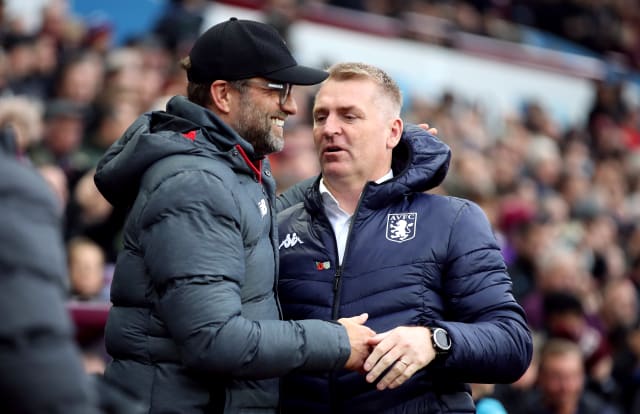 Villa fell behind against Manchester United from a penalty which was awarded after Bruno Fernandes stepped into Ezri Konsa and went down inside the area when trying to turn on the ball.

Referee Jon Moss pointed to the spot and the decision was controversially backed up by VAR official Graham Scott, even though the United man appeared to be the one who fouled Konsa.

That was not the only debatable VAR decision of the day, with Tottenham denied a spot-kick despite Joshua King appearing to push Harry Kane in the box, while Southampton were given a penalty against Everton when James Ward-Prowse looked to be already falling into Andre Gomes before any contact was made.

On each of the three occasions, the VAR official went with the on-field call and Klopp questioned why it was so complicated for such decisions to be overturned when they seemed “obvious” to him.

Speaking at his pre-match press conference ahead of the Premier League champions’ clash with Burnley, Klopp said: “I think it was a week ago, Jose (Mourinho) in his after-match interview said the decision is made by the guy in the studio. Now we have a situation where on one matchday three decisions should have been different.

“I can 100 per cent understand that Dean Smith is really struggling to accept what happened last night.

“I don’t know how it can happen, to be honest. It’s not about who makes the decision, whether it’s two people or three people, in the end it’s just about getting the right decision.

“What I don’t understand is that overruling is so complicated, that it must be a ‘clear and obvious’ misjudgement. I thought they were all obvious, but you’d have to ask the refs why they still stuck to the decision.

“It’s obviously difficult, but last night I didn’t think it was too difficult! It is obviously not right and not good.

“I really would like to think that in the end three people watch it, they should really find the right decision in the end.”

Mourinho was unhappy in the immediate aftermath of Thursday’s match after the VAR official Michael Oliver opted not to give Spurs a penalty just a week after the same man had ruled out Lucas Moura’s goal at Sheffield United.

On Friday, Mourinho said he no longer celebrates goals just in case they are chalked off.

“I don’t celebrate goals anymore, because I never know if it is a goal or not a goal,” said Mourinho ahead of Sunday’s north London derby clash with Arsenal, when Oliver will be the referee.

“Even if I have the feeling it is but maybe something happened six or seven seconds before that, I didn’t realise and then it is not a goal.”

While the decision not to award Kane a penalty benefited Bournemouth, the Cherries were denied what would have been a match-winning goal in the closing stages when Callum Wilson’s overhead strike was ruled out by Oliver after King handled.

Boss Eddie Howe said: “I didn’t look at it too fondly with Callum’s overhead kick because the referee had obviously given the goal. Those moments are difficult to take because you could see what it meant to the players at the time.

“You’ve got the penalty decision with Harry Kane which went in our favour and that could have been different.

“You just want to get the right decisions in the game as much as you can.”

Pep Guardiola is confident the VAR system will improve in its second season in the Premier League.

The Manchester City boss said: “I think next season will be better. It is the first season, but you have to ask the people who are in charge.”

Burnley manager Sean Dyche is still a fan of VAR but said the Manchester United penalty and the decision not to award Kane a spot-kick were “impossible”.

“I’m a big believer in it but it’s an impossible penalty for me,” said Dyche. “Impossible how the Villa player nearly gets quite badly injured, could have, and somehow that’s deemed a penalty.

“And the push on Harry Kane is impossible, in my opinion.