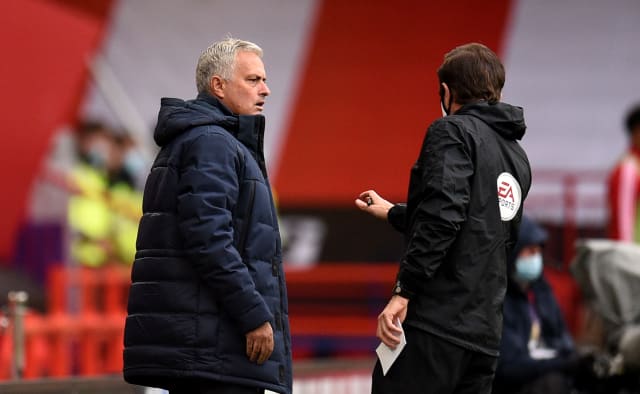 Tottenham head coach Jose Mourinho was unable to discuss Michael Oliver’s appointment as referee for Sunday’s north London derby, but said match officials should have to explain their decisions.

Oliver has been the VAR official in Spurs’ last two away games and made a highly controversial decision in each, first ruling out Lucas Moura’s goal at Sheffield United for handball and then opting not to award a clear penalty at Bournemouth when Harry Kane was pushed.

Mourinho has previous with Oliver going back to 2017, and has heavily criticised the two recent decisions, but Oliver will still have the whistle for Sunday’s match against Arsenal.

Premier League rules forbid managers speaking about referees before a game, but Mourinho wants more accessibility afterwards, especially given the league accepted there were wrong calls in all three matches on Thursday.

“I feel free to comment on referees’ performances after the performances but I don’t like it and I know I can’t by the legal point of view make any comment before matches. And that’s it.

“I don’t know who the VAR was at Villa, in our match was Paul (Tierney) – the referee on the pitch and the referee boss was Michael Oliver. I think you should have access to them, I know the rules don’t allow it.

“I think you should have access to them – to ask directly why. Very important. They are very important in the game. A game is players, managers, referees, I think so.

“It would stop nothing, make things much more open, much more clear. It would give the referee the opportunity to say, ‘Yes, I made a mistake – I feel sorry for that’, or ‘Yes I had incredible performance’, or ‘Yes I was perfect’.

“I think they are very important in the game, as important as players.”

The 0-0 draw at Bournemouth, where Mourinho’s side failed to have a shot on target, did little to help their European ambitions as they failed to move above Arsenal in the table.

They are only a point behind their rivals in the table and Mourinho has billed the game – the first north London derby at Tottenham’s new stadium – as a Europa League shootout.

“In this moment we are both in a very similar situation,” Mourinho said. “It is not that incredible emotion of we are fighting for something really big more than to finish above you or not. I think it is missing that.

“The remaining three are still important. It is a big match for the table, on top of that there is the rivalry.”

It has been a wretched season for the club on and off the field, but no one will be able to forget about it any time soon as it has been captured on camera for Amazon Prime Video’s All or Nothing documentary series.

The trailer was released on Friday ahead of a release later this summer, but Mourinho will not be watching it.

“I try to forget them during the time, if you ask me if it’s something I enjoy, no,” Mourinho added. “I don’t like the feeling of being in Big Brother but I try to forget them. I think I have managed to do that for the majority of the time.

“I have no idea what is there, I have no concerns. Nothing is fake, everything is real. I think for them it must be great for them because they have day by day, 24 hours of what football club and dressing room is. They have everything.

“It is not something I want to do, also because I know better than anyone what our day by day is here but I think it will be very, very interesting for the people who love football and love sport. I think it will be really great for them.”

Dele Alli will be missing for the game against the Gunners as he struggles with a hamstring injury.