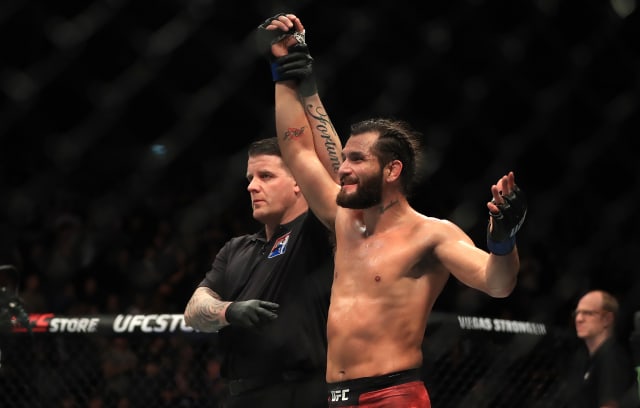 Jorge Masvidal had no hesitation in agreeing to face Kamaru Usman on six days’ notice, branding the UFC welterweight champion “mentally weak” ahead of their Yas Island showdown in Abu Dhabi this weekend.

Usman was scheduled to fight Gilbert Burns at UFC 251 at Fight Island – created for international events due to travel restrictions preventing some fighters from travelling to the United States – but the challenger withdrew.

Masvidal, who beat Liverpool’s Darren Till, the previously undefeated Ben Askren and fellow American veteran Nate Diaz in a highly impressive 2019, has therefore settled his pay dispute with the UFC and put his hand up.

The opportunity represents Masvidal’s first UFC title shot in a 17-year mixed martial arts career in which he has compiled a 35-13 record.

“It’s a fight, it’s not a maths test,” he said. “It’s what I love to do the most, what I’ve done since a child and had a fascination with since my youth so I’ll go out there and believe in myself and give it everything I got.

“On top of it, my opponent, I don’t have faith in him. There’s other guys that I would have said ‘maybe I need more than six days’.

“A lot of guys I’ve fought in the past I wouldn’t have taken on six days. Usman’s the perfect guy to take it on six days. He’s nowhere near as good as advertised. And that’s why I’m here, I’m going to prove it.

“I think he’s mentally weak. His mental weakness is going to come out on Saturday in an abundance, the world’s going to see it and I’ll take full advantage of this individual and his weak ways.”

As well as attempting to make the 170lb limit and adjusting to fighting at 8am local time on Sunday for US TV audiences, Masvidal will step into the octagon without head coach Mike Brown in attendance.

The trainer and a close confidante of the 35-year-old tested positive for coronavirus before the trip to the United Arab Emirates, but the ‘BMF’ champion says he has a “secret weapon” lined up as a replacement.

Masvidal, who along with Usman and other fighters has undergone a number of Covid-19 tests, added: “It was just devastating when I found out Mike Brown was not going to be in my corner.

“But we’ll have an extra person, a secret weapon of mine will be there. We’re ready to go.”

Usman has won 16 of his 17 MMA contests and is seeking a second successful defence of his crown.

The Nigerian-born American is unfazed about the late switch in opponent and gave Masvidal no credit for stepping in.

“He took the fight on short notice but let’s not think he hasn’t been training for this,” Usman said. “He has to train for one guy and that’s me and I was training for a completely different guy.

“Every time you step in as a champion you’re going to feel pressure but champions are able to get over that. A fight is a fight, I’m going to get in there and do what I do.”

There are two other title bouts on a stacked card, with Australian featherweight Alexander Volkanovski defending his belt against former champion Max Holloway.