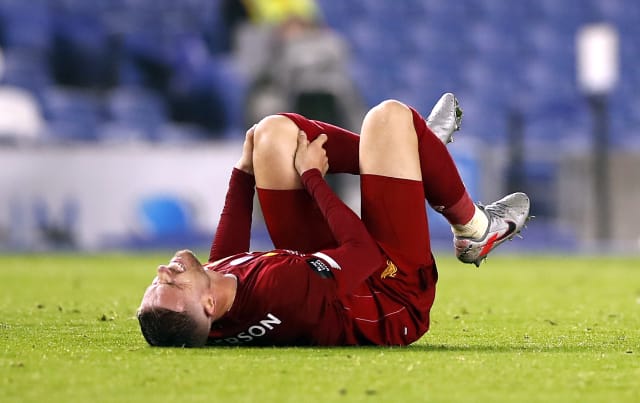 Liverpool captain Jordan Henderson will miss the end of the season with a knee injury but manager Jurgen Klopp insists it will not stop him lifting the Premier League trophy.

The England international was forced off 10 minutes from the end of Wednesday’s win at Brighton after a collision with Yves Bissouma and a scan has revealed a knee problem which will keep him out of the club’s remaining four matches.

But Klopp is confident it will not impact on next season – and will definitely not stop him standing on the podium at the club’s final home match against Chelsea later this month to celebrate ending 30 years without a title.

“Hendo is the best possible of all bad news: it is a knee injury but no surgery needed,” said Klopp.

“He will not play any more in the latter stages of this season but I am pretty positive he will start with us the new season.

“It was an awful moment when he went down with injury. In Germany, we would call him an animal as he deals with pain so well.

“You saw he knew something happened which shouldn’t have happened. Everyone felt for him. It was a real mood killer.

“We were all concerned when we saw him going down and he left the pitch and when we got the news it was a big relief for all of us.

“It is not cool but it is the best we could get, Hendo is a quick healer and he will be back soon.