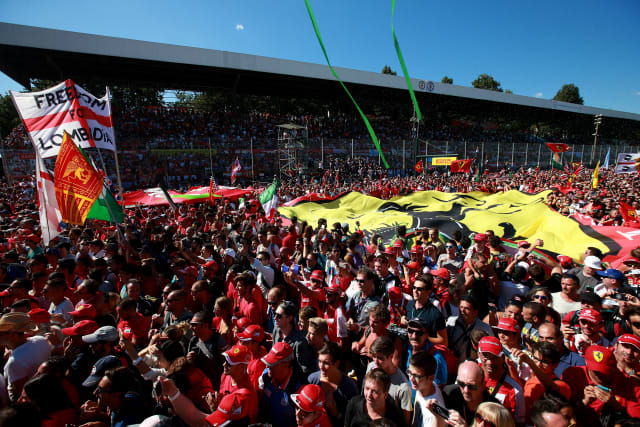 Formula One is considering its first steps to normality by allowing fans to attend the Italian Grand Prix on September 6.

The opening races of the coronavirus-hit schedule are taking place behind closed doors.

But the PA news agency understands that the historic Monza circuit – host to the eighth round of this season’s truncated calendar – has been earmarked as the first venue where spectators could be permitted.

The race at the Cathedral of Speed usually provides one of the most vibrant atmospheres of the year, with Lewis Hamilton traditionally afforded a hostile welcome by the Ferrari-supporting faithful.

Promoters, teams, and F1’s owners Liberty Media are keen to see the return of spectators – but they will only be allowed when it is considered safe.

On Friday, the sport revealed no positive coronavirus tests from almost 9,000 samples of the sport’s travelling personnel over the last fortnight.

When fans do come back, they could be required to perform social distancing and wear face masks, while only a limited number of them would be permitted through the gates.

The news that spectators may return within two months will provide a boost to the sport as Hamilton prepares to get his title defence back on track in front of scores of empty grandstands again in Austria.

Sunday’s Styrian Grand Prix – the second race in successive weeks at the Red Bull Ring – is among 10 to have now been confirmed by the sport’s bosses.

It was announced here on Friday that the Ferrari-owned Mugello track, 25 miles away from Florence, will play host to the Italian team’s 1,000th race on September 13.

The Russian Grand Prix has also been given the green light to take place at the end of the same month. Organisers of the Sochi race have confirmed they will allow spectators.

The campaign is expected to end with three consecutive rounds in the Middle East – with Bahrain to host two races before the season closer in Abu Dhabi on December 13.

F1’s owners Liberty Media remain hopeful of staging at least 15 grands prix this year, and possibly as many as 18.

Defending champion Hamilton kicked off his bid to match Michael Schumacher’s record of seven titles with his worst start to a season since 2014 – finishing fourth here last weekend after he was penalised for hitting Red Bull’s Alexander Albon in the closing stages.

And Hamilton finished only sixth in practice on Friday as he struggled to get to grips with the handling of his Mercedes.

Hamilton, who finished more than half-a-second back, is hopeful that he will be able to continue to “take a knee” in the fight for equality – a topic that dominated the build up to the season opener.

It is understood that the 20 drivers are unlikely to gather before the start of the race to perform the gesture.

Last week, six of them, including Verstappen and Ferrari’s Charles Leclerc, did not kneel in a period of reflection before the race.

Hamilton could yet choose to take a knee alongside his Mercedes team on the grid.

“I don’t feel like I need to re-focus on the championship,” said the six-time world champion. “My race last weekend was pretty strong.

“I need to do a better job this weekend, but I wouldn’t say that I was distracted by any means. I continue to stay focused on both trying to win this championship, but also fighting for equal rights.”

Although it was a sweltering 35 degrees here on Friday, qualifying could be heavily disrupted with thunderstorms forecast to arrive in the Styrian Mountains on Saturday.