Adama Traore will assess shoulder problem at end of the season 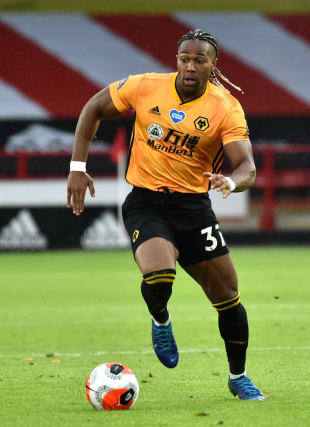 Adama Traore will wait until the end of the campaign to discover whether he needs surgery to address his shoulder problem.

The 24-year-old Wolves striker dislocated his left shoulder for the fourth time this season 90 seconds into Wednesday night’s 1-0 Premier League defeat at Sheffield United, but gamely played on until 11 minutes from time.

Head coach Nuno Espirito Santo is yet to rule Traore out of Sunday’s home clash with Everton after seeing the frontman work on a specialised fitness programme during lockdown, but admits that a decision may have to be taken when the summer break finally arrives.

Asked if Traore could require surgery, he said: “I don’t know. During this period when we didn’t compete, Adama was able to do a special programme for his shoulder.

“It is something that he has to overcome mentally and after, we have to address it in a proper way. But I’m totally confident that for now, he’s okay.

“It’s something that we have to decide together. I think he needs a scan, he needs to have a good opinion from the doctor and then we’ll decide.

“What is important now is that he’s okay, struggling of course because the pain is there, but he’s been able to compete.”

Traore’s partnership with Raul Jimenez has been a key factor in Wolves’ bid for Champions League qualification, which has been dented by successive defeats at the hands of Arsenal and the Blades, although their current points tally of 52 is just five short of last season’s total with four games remaining.

Given the demands of an ongoing Europa League campaign, that is a source of huge satisfaction for Nuno.

He said: “We must be proud of how we have done things. The ‘how’ is very important with us.

“There are still games to go, let’s focus on that, but your question is my answer. Sometimes it’s important not to lose the perspective of things.

“There are some moments when you are able to see things over all the time we have been working together – it’s almost three years now – so let’s keep on being together and improving.”