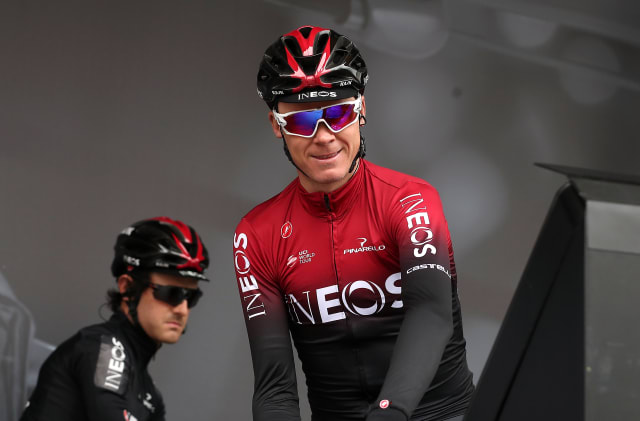 Seven-time Grand Tour winner Chris Froome will leave Team Ineos for Israel Start-Up Nation at the end of the season to bring an end to a decade-long association with Sir Dave Brailsford’s team.

The four-time Tour de France winner has agreed to join the Israel Start-Up Nation squad on an undisclosed deal which his new team said would see Froome “wear ISN’s blue and white until the end of his illustrious career”.

“I’m really excited to be joining the ISN family,” Froome said. “I look forward to challenging and being challenged by their talent and continuing to strive for the success that I’ve enjoyed up to now.”

Froome’s new team have promised the 35-year-old leadership in the Tour, something he could no longer be sure of at Ineos in the wake of his devastating crash last summer and the emergence of both Geraint Thomas and the 23-year-old Egan Bernal, who have won the past two editions of the Tour between them.

“Given his achievements in the sport, Chris is understandably keen to have sole team leadership in the next chapter of his career – which is not something we are able to guarantee him at this point,” Brailsford said. “A move away from Team Ineos can give him that certainty.”

Froome has fought his way back from career-threatening injuries suffered in a high-speed crash at the Criterium du Dauphine last year, determined to win what would be a record-equalling fifth Tour title.

But tensions over team leadership had led to weeks of speculation over his future and suggestions he could even make a rare mid-season move.

He was linked with both Israel Start-Up Nation as well as Bahrain-McLaren in recent weeks, though there had also been the possibility he would stay at Ineos until late last month.

“It has been a phenomenal decade with the team, we have achieved so much together and I will always treasure the memories,” Froome said.

“I look forward to exciting new challenges as I move into the next phase of my career but in the meantime my focus is on winning a fifth Tour de France with Team Ineos.”

No final team selection has yet been made for the Tour, though Froome remains on course to start. He is currently on a training camp in Mallorca, and is due to ride in three stage races – La Route d’Occitanie, Tour de l’Ain, and the Dauphine – next month before the Tour begins in Nice on August 29.

With Thomas and Bernal also due to be in the Tour line-up, there should be a fascinating battle for dominance within the team that has won seven out of the past eight Tours.

“(Froome’s exit) will also give other members of our team the leadership opportunities they too have earned and are rightly seeking,” Brailsford said.

“I am excited about the talent we have right across the team at the current time and all our collective focus is on preparing for the season ahead. Like everyone across the sport we are all looking forward to the start of racing next month.”

Israel Start-Up Nation were founded in 2015 but quickly rose to prominence as they were given a wildcard entry to the 2018 Giro d’Italia when it started in Jerusalem, and moved up to the WorldTour level this year in a takeover of the Katusha-Alpecin team.

Irish rider Dan Martin and British time trial champion Alex Dowsett are both on their squad this year.

Froome joined Team Sky for their inaugural season in 2010, developing from a somewhat awkward domestique into the finest Grand Tour rider of his generation.

He was second on the podium when Sir Bradley Wiggins became the first Briton to win the Tour in 2012, with many feeling he could have beaten Wiggins given the freedom to race his team-mate, and went on to take the top step himself in 2013, 2015, 2016 and 2017, having crashed out in 2014.

Froome completed a Tour-Vuelta a Espana double in 2017, and then held all three Grand Tour titles at the same time when he followed up with a dramatic victory at the Giro in 2018.

His seventh Grand Tour title was announced while he was still in a hospital bed last summer as he was retrospectively awarded the 2011 Vuelta crown due to a positive drugs test for Juan Jose Cobo.