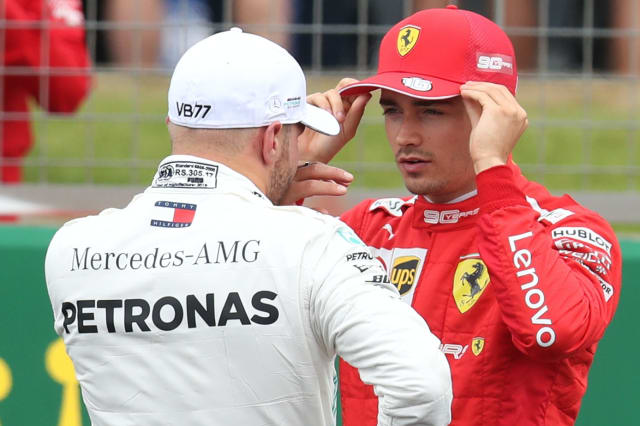 Valtteri Bottas and Charles Leclerc are under investigation by Formula One's governing body for an apparent breach of Covid-19 protocol.

Bottas – Lewis Hamilton's team-mate at Mercedes who leads the championship after winning last week's race in Austria – and Leclerc both flew back to their homes in Monaco following Sunday's round.

The second grand prix of the season takes place at the same Spielberg venue this weekend.

Under new rules drawn up during the Covid-19 era, all F1 personnel are required to remain within their so-called bubbles between races as a precaution against the virus.

But a picture of Ferrari's Leclerc on social media appears to show him posing with a waiter at a Monte Carlo restaurant earlier this week.

Bottas' bubble consists of girlfriend Tiffany Cromwell and trainer Antti Vierula. The Finn also posted on Instagram while in Monaco. He arrived back in Austria by plane on Thursday. Hamilton has remained on site at the Red Bull Ring this week.

Article 3.14 of the FIA's Covid-19 Code of Conduct reads: "Any time that Profile 1 Attendees spend outside the Venue during a Covered Event or between Covered Events must be spent with other members of the same Group, keeping interaction with persons outside that Group to a minimum."

The FIA is now looking into both drivers' movements to see whether they have broken any rules.

A Mercedes spokesperson said: "Valtteri remained in his bubble and maintained Covid testing protocol, being tested in Monaco on Tuesday and again today at the track."

Both Bottas and Leclerc – who finished behind the Finn on Sunday – defended their actions ahead of the Styrian Grand Prix.

"Obviously I found out if it was allowed to go back and it was," said Bottas. "It doesn't really make a difference if I stay with the same people in the same bubble whether I'm here or back home in Monaco.

"So I decided to go back home. We are in Europe and travelling is pretty short so there's no stress really from that. It was a good decision from my side. From a safety point of view there is no difference at all."

Leclerc added: "I went back home for two days and then did two tests to be sure of the results."

A verdict from the FIA could be delivered as early as Thursday night.

Please be safe and wear your mask. Thinking of you all 🙏🏾 pic.twitter.com/LFgtj7UKH3

Hamilton is staying in his motorhome within the parameters of the track for the first two races in Austria.

The six-time world champion finished fourth at the opening round after he was handed a timed penalty for a collision with Red Bull driver Alexander Albon.

Hamilton said here that he is hopeful he will be able to "take a knee" before Sunday's race in the fight against racism.

It is understood that that the drivers will not line up at the front of the grid to perform the gesture as happened here last weekend.

Hamilton was joined by 13 drivers in kneeling while six, including Leclerc and Red Bull's Max Verstappen, elected to stand. Both posted anti-racism messages to their social media accounts.

"I am not against taking a knee again if I can," said Hamilton. "If I find a way of making sure that it doesn't get in the way of doing my job then I will do it.

"It was encouraging to see the Red Bull team taking a knee by the car last week. So, maybe if we have time, that is something my team and I can do.

"It is important that this is not just a small moment and then go back to things as normal. We have to continue to speak out, to utilise the moment, spread awareness and continue to push for change and that is not going to go away any time soon. It is not going to change in a couple of weeks so I will continue to do my utmost."