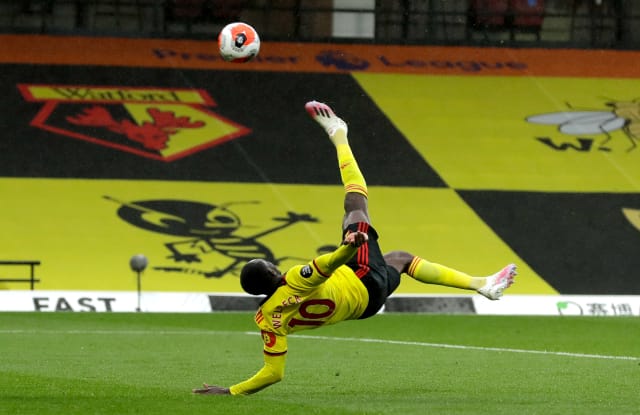 Watford’s survival chances were handed a huge boost as a Danny Welbeck wonder-strike secured a 2-1 win over Norwich at Vicarage Road.

Welbeck capitalised on a deflected cross to hit an incredible overhead kick as Nigel Pearson’s side came from a goal down to secure their first victory since the Premier League restart.

The Canaries have now lost all six of their matches following the resumption, but took the lead through Emiliano Buendia inside the first five minutes at Watford.

Buendia’s strike was Norwich’s first Premier League goal since February 29 and also marked the first time Daniel Farke’s men had taken the lead since that date, although their advantage was short-lived.

Craig Dawson’s header levelled the game six minutes later with his second goal since the break.

In the second half, Watford edged closer to claiming their first win since the restart when Welbeck struck.

The 29-year-old put his side ahead for the first time in the match with the second bicycle kick scored by Watford since the restart – the first was Dawson’s leveller against Leicester.

Norwich looked to make an immediate impact on the game and forced Ben Foster into an early save from a Buendia free-kick.

The visitors then broke the deadlock in the fourth minute. Onel Hernandez found space before playing in Buendia, who cut inside and curled the ball into the far corner.

Daniel Farke’s side could not hold onto their lead for long, however, with Dawson heading home at the far post from an Etienne Capoue free-kick to level the game in the 10th minute.

Norwich looked to pile on the pressure in the latter part of the first half, playing fluent football and trying to get behind the Watford defence. But they nearly found themselves caught out when Tim Krul had to make a diving stop to deny Welbeck heading the ball into the net form a corner.

Watford came close to taking the lead just before half-time, but Ismaila Sarr’s cross was headed just over the Norwich bar by Abdoulaye Doucoure.

The start of the second half was similar to the start of the first. The visitors enjoyed longer periods of possession, but did not make a similar breakthrough, although Foster had to stretch out his leg to deny Max Aarons his first goal of the season.

However the Canaries were caught out by a quick break from the home side, and Sarr’s cross was deflected before Welbeck scored his first Premier League goal for the club with a spectacular overhead kick.

The home side were nearly caught out in the final stages, but Adam Idah directed a flick from Josip Drmic just wide of Foster’s goal.

Although Norwich tried to force their way back into the game and claim a point, Pearson’s side were able to hold out for their first win since their shock victory over Premier League champions Liverpool in February.

Ronnie O’Sullivan: Just like a fat Maradona, only natural talent gets me through