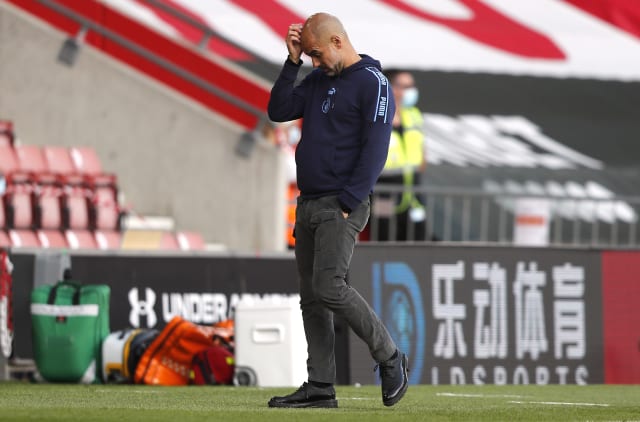 Pep Guardiola has warned his Manchester City side to cut out the mistakes – or risk their Champions League and FA Cup bids falling short.

City boss Guardiola has blamed too many errors for his team’s failure to defend their Premier League title this season.

On Sunday City paid the price for another slip-up as they suffered a 1-0 defeat at Southampton in a game they otherwise dominated.

With City’s main focus now this month’s FA Cup semi-final against Arsenal and the second leg of their Champions League last-16 tie against Real Madrid in August, Guardiola wants these problems ironed out.

He said: “All the season we have played really good in terms of what we wanted to do. The commitment of the players is without a doubt still – after two or three successful seasons – unbelievable, but we are in the point where we sometimes make mistakes. We have to avoid this.

“If we can play like we play – and I don’t have doubts that is going to happen – and we are consistent in both boxes, we will have a big chance to go through to the final of the FA Cup and the quarter-finals of the Champions League.

“But if it happens like against Southampton, Tottenham at home and away and Norwich away, where we’ve dropped points, we will be out and Arsenal will be in the final and Madrid will go through.

“Hopefully we can be lucky to convert what we produce and to defend.”

Guardiola, who was speaking at an online press conference to preview Wednesday’s game against Newcastle, accepts this problem has bedevilled him all season.

“I was not able to solve this problem that we had since the beginning,” said Guardiola, who was wearing a Nina Simone T-shirt with a message reading, ‘Love Simone, Hate Fascism’.

“I remember the game against Tottenham at home. They made two shots on target and we shot more than 20, and we drew.

“It happened the second game in the league and the last one at Southampton was quite similar. I was not able to change this dynamic in many games.”

City are still waiting to learn where their clash against Real will be played. The recent Government announcement that selected international sports stars competing in the UK will be exempt from quarantine requirements has removed one obstacle to staging the game at home.

However, a final decision on whether it will be at the Etihad Stadium or a neutral venue in Portugal is still to be made by European governing body UEFA.

Guardiola says this is something he cannot influence.

He said: “I am not strong enough to have this impact, I am not the president. I never spoke with any people from UEFA.

“I have said many times, we want to play in Manchester, that is normal, but we will accept playing where UEFA decide to play – in Portugal, Germany or wherever.”

Guardiola refused to discuss a recurrence of rumours linking City with Lionel Messi but, as a former Barcelona manager who remains a fan of the club, he did add: “My wish is Messi is going to stay at Barcelona.”