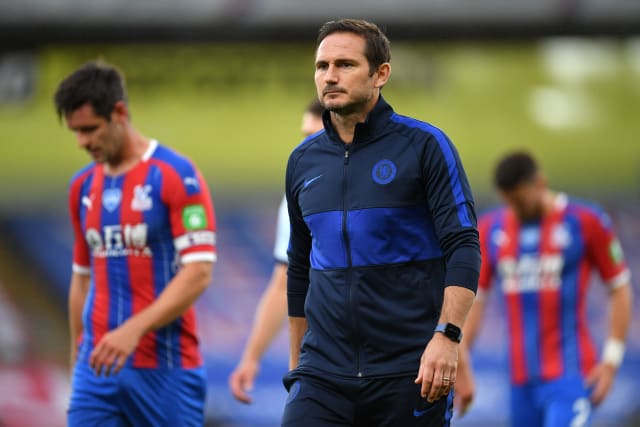 Frank Lampard was frustrated with Chelsea’s lack of control during their thrilling 3-2 victory at Crystal Palace.

Goals from Olivier Giroud, Christian Pulisic and Tammy Abraham ensured the Blues took the points from an end-to-end London derby, but it could have been very different.

Kepa Arrizabalaga was forced into a wonderful fingertip save to deny Scott Dann before Christian Benteke was thwarted by Kurt Zouma’s last-ditch challenge in the 96th minute.

While happy with the win, Lampard was not pleased with how tense the Premier League contest became at Selhurst Park.

He said: “We should have had the game under much more control at that point.

“At 2-0 we should have carried on and controlled the game better and at 3-2 we had a lot of chances, good chances, to finish it off.

“There was slight wrong decisions made on the final pass or shot and then it invites pressure.

There were positives for Chelsea, including Abraham finding the net for the first time since January 11.

Kepa’s stoppage-time save also showed his worth after he was criticised for not doing more to keep out Wilfried Zaha’s strike, which brought the game back to 2-1.

Lampard added: “I mentioned Tammy scoring and his confidence. When you are at the end of the pitch, goalkeepers probably even more so, confidence is huge.

“I am really pleased for him and we need that to be a top team – goalkeepers making those sort of saves at times to pull you through and he did it.”

Billy Gilmour made his second league start for the Blues, preferred ahead of Jorginho with N’Golo Kante injured, but Lampard praised the Italian after his 80th-minute introduction.

“It doesn’t mean anything about the future of Jorginho or Billy or anyone else in the team,” the Chelsea manager added.

“We saw the impact Jorginho had in calming the team down and giving us passes at the end. I know he can give us that and I know he will continue to give us that.”

Roy Hodgson hailed the effort of his Palace side, especially after they lost Gary Cahill in the sixth minute to a hamstring injury.

The defender went down while trying to track the run of Willian, who picked out Giroud for the opener.

But Hodgson said: “It would be unrealistic of me to suggest they should have put their foot on the ball and stopped to see how Gary was.

“That is not the way football is, but it certainly was a very unfortunate incident that happened so early.

“In the end it cost us a point because that was the goal they won by, they won by one goal.”

He added: “The players deserve to be very proud and pleased with that performance.”