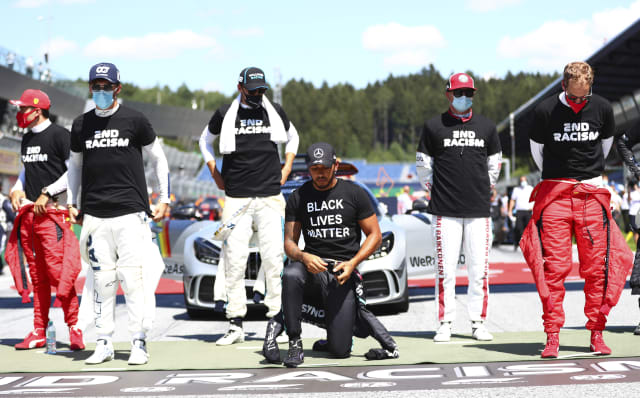 Formula One bosses will not stop Lewis Hamilton from continuing to take a knee at races this season.

Hamilton knelt before the first round in Austria, and subsequently revealed he would carry on performing the gesture if he was provided with a platform to do so by the sport.

The PA news agency understands that both F1’s American owners Liberty Media and governing body the FIA will inform Britain’s six-time world champion that he is free to kneel at the next instalment of the championship in Austria this weekend and for the remainder of the year.

The final decision is set to rest with the drivers, who are likely to discuss the divisive subject again in Spielberg on Friday.

Red Bull’s Max Verstappen and Ferrari driver Charles Leclerc, were among six who elected to stand in the moments before Sunday’s race. Both posted messages saying they were committed to the fight for equality.

But it is believed that some of the drivers who knelt last weekend could now decide to stand on Sunday.

The Spanish driver Carlos Sainz was among those who stood. His McLaren boss, the American Zak Brown, told BBC Radio 4’s Today programme: “There was unity on the grid.

“It depends how you view people’s actions. All the drivers were very clear that they support ending racism. People are entitled to express their views in different ways, so I personally don’t think one gesture is necessarily how you have to do that.”

F1’s motorsport boss Ross Brawn added: “Formula One’s position is clear. Racism has no place in our sport. We want more diversity and we want more inclusion and we are doing everything we can to facilitate that going forwards.

“The drivers coming together on the grid ahead of the racing was a powerful message, with people free to support this fight in their own personal way. Drivers have thrown their support behind the campaign and are open and honest about their own role in advocating for change.”

Hamilton, 35, will be looking to bounce back from a disappointing start in his assault on Michael Schumacher’s record seven championships this weekend.

The Mercedes driver was relegated from second to fifth on the grid following a yellow-flag infringement in qualifying. He was then penalised by the stewards in Sunday’s race after taking Red Bull driver Alexander Albon off the circuit, eventually finishing fourth.

The collision marked the second time in three races Hamilton has been punished for crashing into Albon. The London-born driver called Hamilton a “sore loser” in the moments after the incident.

But Hamilton said: “I have a huge amount of respect for Alex. He is a super-talented young man and I don’t have any bad blood or bad feelings towards him.

“It is unfortunate that we collided and I wouldn’t ever want to collide with anybody. I did apologise to Alex in an interview, but I watched the replay and I felt it was a racing incident.”