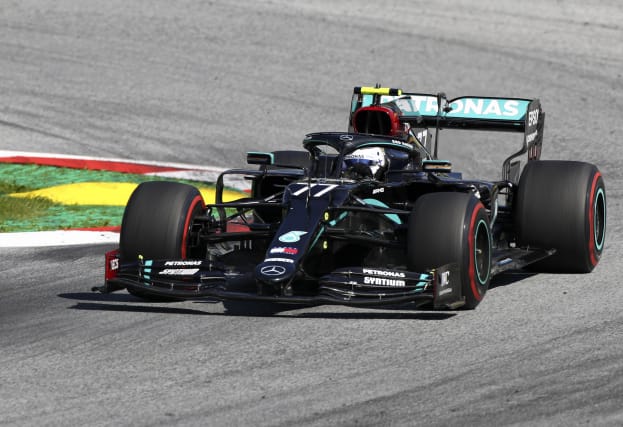 Valtteri Bottas won an incident-packed first race of the new Formula One season in Austria, as Lewis Hamilton was demoted to fourth following a five-second time penalty.

Bottas, who led every lap in a peerless performance, crossed the line just 0.6 seconds clear of his Mercedes team-mate, but the world champion was penalised after he was involved in a crash with Red Bull driver Alex Albon in the closing stages.

Ferrari driver Charles Leclerc moved up to second, with British driver Lando Norris taking the first podium of his career to finish third.

Red Bull appeared to have pulled off a tactical masterstroke by pitting Albon for fresh tyres during a second of three safety car periods.

On the restart and with just 10 laps of racing left, Albon moved round the outside of Hamilton at the fourth corner but on the exit the Briton refused to concede the position – with his front-left tyre hitting Albon's right rear.

Albon was launched into the gravel, ending his chances of a dramatic win. The stewards laid the blame at Hamilton's door.

It marked the second time in three races the pair have collided. Hamilton was also penalised for hitting Albon at last year's Brazilian Grand Prix.

The penalty capped a dramatic afternoon for Hamilton, who was earlier sent back to fifth on the grid for a yellow flag infringement in qualifying.