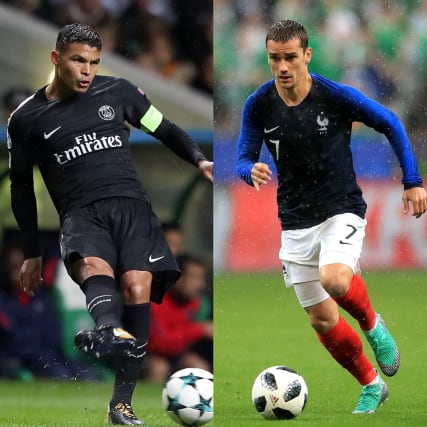 Arsenal could be in with a chance of signing French World Cup winner Antoine Griezmann from Barcelona, the Daily Express reports. The LaLiga giants had high hopes for the 29-year-old forward when they signed him from Atletico Madrid last year, but he has struggled to make an impact at the Nou Camp. Arsenal have emerged alongside Inter Milan as the front-runners to secure his services, with the Gunners’ Matteo Guendouzi and Pierre-Emerick Aubameyang possible swap bait.

Mikel Arteta is also interested in Brazilian defender Thiago Silva, according to Le10 Sport. The Arsenal boss is said to be hoping his defender David Luiz can convince his countryman to join him at the club when he exits Paris St Germain this summer. Silva, 35, has had eight years in Paris and will leave on a free transfer.

Tottenham defender Serge Aurier could be on his way to Monaco, Sky Sports reports. The 27-year-old is keen on joining the Ligue 1 club, despite finding a new lease of life at Spurs since Jose Mourinho took over. The Ivorian has two years remaining on his contract.

Goalkeeper Fraser Forster looks set to stay at Southampton next year in a heavy blow for Celtic, The Sun reports. The 32-year-old was sent to Scotland on loan last year and Neil Lennon has been eager to extend his stay by another season. However, Saints boss Ralph Hasenhuttl wants Forster to stay to challenge Alex McCarthy for the top goalkeeping spot at St Mary’s.

Thomas Partey: Arsenal are still interested in the Atletico Madrid midfielder but are unwilling to meet his £45million release clause, The Athletic reports.