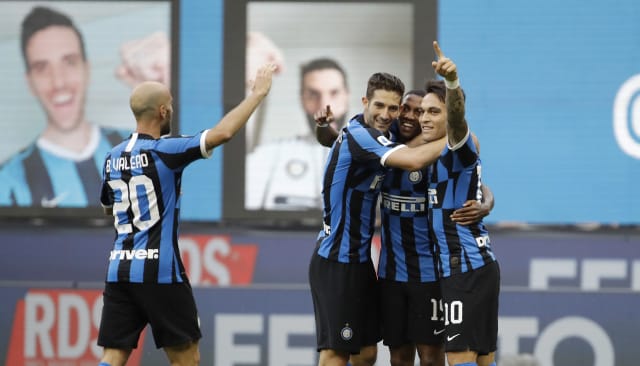 Ashley Young set Inter Milan on their way to a 6-0 rout of lowly Brescia to close the gap on Serie A’s top two.

The England full-back opened the scoring with just five minutes gone, and Alexis Sanchez’s penalty and a third from Danilo D’Ambrosio put them in complete control by the break.

Roberto Gagliardini made it 4-0 seven minutes into the second half before substitutes Christian Eriksen and Antonio Candreva struck inside the final seven minutes to complete the rout.

Derby rivals AC Milan needed an injury-time own goal to spare their blushes at bottom-of-the-table SPAL as they fought back from 2-0 down to take a point.

Mattia Valoti fired the basement boys into a 13th-minute lead, and they were in dreamland when Sergio Floccari made it 2-0 on the half-hour.

However, Marco D’Alessandro’s dismissal two minutes before half-time left them defending for dear life and after substitute Rafael Leao’s 79th-minute strike had given the visitors hope, Francesco Vitari’s own goal in the fourth minute of added time ensured it finished 2-2.

Substitute Matteo Pessina snatched a 3-2 victory for Verona over Parma with an 81st-minute winner after Samuel Di Carmine and Mattia Zaccagni had exchanged goals with Dejan Kulusevski and Riccardo Gagliolo.

Sampdoria’s Gaston Ramirez scored twice from the spot to clinch a 2-1 win at Lecce in a game of three penalties.

Ramirez was successful from 12 yards after 40 and 75 minutes, either side of Marco Mancosu’s effort to edge the club four points clear of the drop zone.

The excitement at the Renato Dall’Ara came either side of half-time as Bologna and Cagliari played out a 1-1 draw.

Musa Barrow put the home side ahead in first-half stoppage time, but Giovanni Simeone levelled within seconds of the restart to claim a point.

In Spain, Gerard Moreno scored both goals as Villarreal moved to within three points of LaLiga’s top four with a 2-0 win at 10-man Real Betis.

The visitors were in front within seven minutes of kick-off when, after Carlos Bacca had been fouled by Marc Bartra, Gerard scored from the penalty spot, and he added a second before Betis’ Nabil Fekir was dismissed for two bookable offences in added time at the end of the first half.

Raul Garcia fired Athletic Bilbao into a 13th-minute lead at the Mestalla, and then helped himself to another goal two minutes into the second half to seal a 2-0 win over Valencia.

Goals from Antonin Cortes Heredia and Roberto Soldado either side of half-time were enough to secure victory by the same score for Granada at Alaves, while the game between Real Valladolid and Levante ended goalless.