Picture of the day – July 1 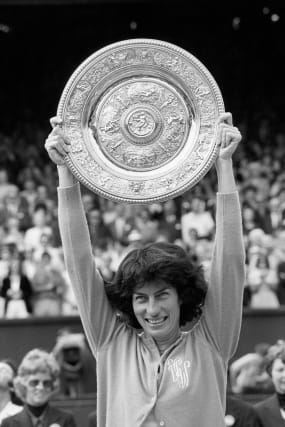 This is the moment that Britain’s Virginia Wade held aloft the Wimbledon title, presented to her by the Queen.

Wade, 31 at the time, defeated Betty Stove of the Netherlands 4-6, 6-3, 6-1 on Centre Court in what was the tournament’s centenary year, and the year of the Silver Jubilee of Queen Elizabeth II.

Her face says it all, the triumph in 1977 was the pinnacle of her career and her third Grand Slam win following success at the Australian Open (1972) and US Open (1968).

Wade won 55 career titles, including a further four Grand Slams in doubles, before retiring from playing in 1986.

Since then Wade has coached and has also worked as a tennis commentator and game analyst for television.