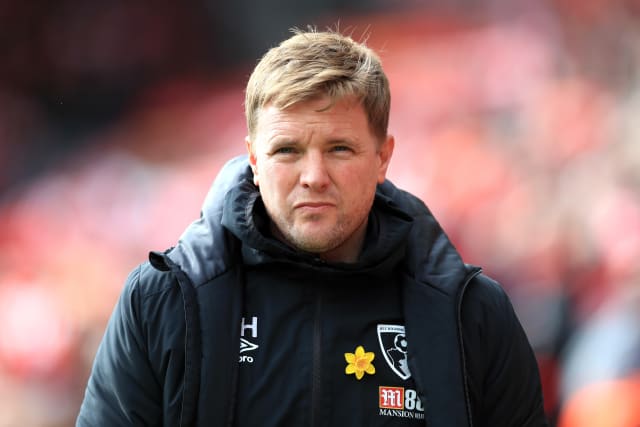 Eddie Howe admits Bournemouth’s Premier League relegation scrap is “consuming” him but insists his side are capable of winning each of their seven remaining games.

The struggling Cherries have taken just a single point from the last 18 available and remain in the drop zone on goal difference ahead of Wednesday evening’s clash with Newcastle.

Manager Howe says the perilous situation is not yet causing him restless nights, although he acknowledges a swift upturn in results is required to ensure top-flight survival for a fifth successive year.

“My sleep is very good,” said Howe. “It has to be because your brain has to be very sharp, you have to keep yourself in really good physical condition.

“(But) I am hurting from this situation, I’m not going to lie, it’s painful, it’s consuming me.

“I’m using all of those emotions to help direct the team in the way we need to go.

“There’s no part of me that’s feeling sorry for myself or despondent. It’s a motivated, fully-energised, fully-focused manager that the players are getting to get results and to achieve our objectives.

“I believe we can win every game that we’ve got between now and the end of the season.

“No game is a write off, in my opinion. We need to start winning and performing very quickly.”

After hosting the Magpies, Bournemouth face a tricky run of fixtures against Manchester United, Tottenham, Leicester and Manchester City.

The goal-shy Cherries have struggled to score all season, with only Crystal Palace and bottom club Norwich having found the net on fewer occasions.

Howe’s attacking options have been dealt a major blow going into the Newcastle game as top scorer Callum Wilson begins a two-match ban after collecting a 10th booking this term in the defeat at Wolves, while fellow forward Joshua King is a major doubt due to an ankle injury.

The selection problems could lead to another opportunity for one-time England international Dominic Solanke.

The 22-year-old striker is still searching for his maiden Premier League goal for the Cherries after costing a reported £19million from Liverpool in January 2019.

Howe has been impressed with Solanke’s application and remains hopeful the big-money signing can overcome a difficult start on the south coast.

“I’m sure Dom from his side is very keen to show everybody his talents and how good he is on a consistent basis,” said Howe.

“We see it close at hand, we see him train every day, he’s on a journey of improvement and developing himself at this moment in time.

“I’ve very pleased with how he’s conducted himself, how he’s knuckled down, how he’s worked behind the scenes.

“My wish is that he just goes out and plays his game and shows his talents in his own unique way because he’s a really, really strong team player.

“His overall game is improving and for any player – a young player especially – when you’re on the path of improvement, you’ll see the benefits at a later date.”

While Norway forward King will undergo a late fitness test having not trained since limping off during the loss to Crystal Palace on June 20, midfielder Philip Billing has recovered from a dead leg.