Holders City ease into semi-finals with win over Newcastle 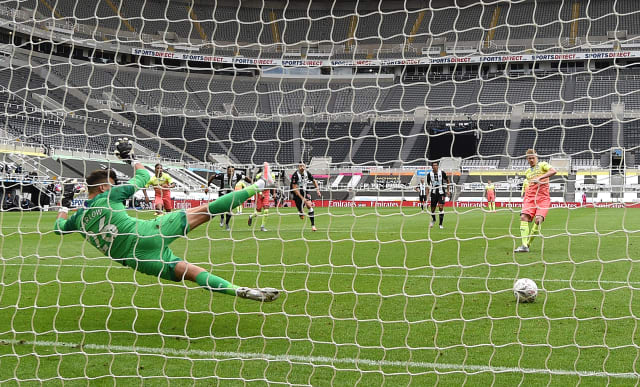 Kevin De Bruyne converted a first-half penalty after Fabian Schar’s push on Gabriel Jesus and Raheem Sterling wrapped up victory for the holders with a superb curling effort after the break.

City, who avoided an all-Manchester semi-final when the draw was made by BBC pundit Alan Shearer at half-time, will play Arsenal in the last four.

Manchester United will play Chelsea with both ties to be played at Wembley over the weekend of July 18/19. The final is scheduled for Saturday, August 1 at the same venue.

Ross Barkley stepped off the substitutes’ bench to send Chelsea through with the game’s only goal in a deserved 1-0 win at Leicester.

Barkley, one of three Chelsea replacements during half-time at the King Power Stadium, turned home the winner at the near post in the 63rd minute following Willian’s cross.

It was the England midfielder’s third goal in the competition this season having netted in previous rounds against Nottingham Forest and Liverpool.

Ceballos, on loan from Real Madrid, fired home a low angled shot in the first minute of added time soon after David McGoldrick’s late equaliser appeared to have sent the tie at Bramall Lane into extra time.

Arsenal, who have won the Cup three times in the last seven years, had taken the lead midway through the first half through Nicolas Pepe’s penalty after Chris Basham’s foul on Alexandre Lacazette.

Manchester United, who last won the competition in 2016, booked their place in the last four on Saturday when Harry Maguire forced home the decisive goal in extra-time to clinch his side a 2-1 win at Norwich.