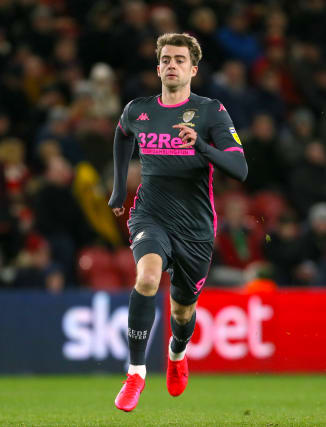 Patrick Bamford, Ezgjan Alioski and Jack Harrison sent Leeds top of the Championship with a 3-0 win over promotion rivals Fulham.

Fulham striker Aleksandar Mitrovic was lucky to avoid censure for elbowing Ben White in the face, while Neeskens Kebano was sent off late on after receiving two bookings.

Brentford’s 1-0 win over West Brom on Friday night paved the way for Leeds to move top, and the Whites fired back to form after Sunday’s 2-0 defeat at Cardiff.

Tom Lawrence opened the scoring for the hosts but was sent off after the final whistle, with Reading’s Matt Miazga also dismissed as the pair clashed at the death.

Andy Rinomhota headed Reading back into the fight just past the hour, but Derby held out to make it two wins in two since the restart.

Warnock replaced Jonathan Woodgate at the Riverside Stadium helm in midweek, and this immediate victory will boost his new side’s survival fight.

Stoke had Nick Powell sent off late on, in a frustrating day for the Potters.

Cardiff conjured a 21-minute, three-goal blitz to sink Preston 3-1 at Deepdale, and boost their promotion hopes.

Joe Ralls headed the Bluebirds in front in the 69th minute, only for Daniel Johnson to equalise for the hosts.

But Nathaniel Mendez-Laing and Robert Glatzel bagged late goals for Cardiff, allowing the visitors to leapfrog Preston and into the top six.

Luton hauled themselves off the bottom of the table thanks to a shock 1-0 win at Swansea.

James Collins headed the winner, while Swansea had Jordon Garrick sent off in the 83rd minute for punching Luton’s goal-scorer.

Darren Pratley’s 12th-minute header proved enough for Charlton to boost their survival hopes with a vital home win over QPR.

Barnsley slipped to the foot of the table with a goalless draw at home to Millwall, failing to capitalise on their 1-0 win at QPR.

Gary Gardner rescued Birmingham a point by striking his second goal in a 3-3 draw with Hull at St Andrews.

Daniel Crowley also found the net for the Blues, but Josh Magennis, James Scott and Kane ensured Hull stole a share of the spoils.

The Wales midfielder broke a 25-match drought dating back to Wigan’s 3-2 win over Cardiff on August 3, firing into the roof of the net with 10 minutes to play.

And at the death Michael Jacobs blasted home to seal the home side’s victory.