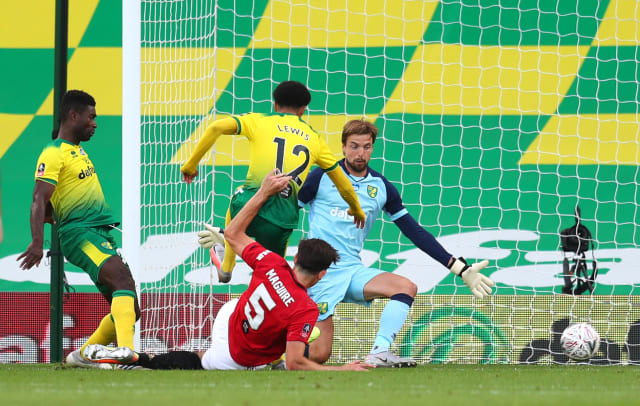 The Red Devils became the first side to secure their place in Sunday’s draw as they edged past the Canaries, who were dreaming of Wembley on their first quarter-final appearance since 1991-92.

Norwich were just minutes away from a penalty shootout after holding firm in extra-time following Timm Klose’s sending off, but Maguire directed home at the death to seal a hard-earned 2-1 win at Carrow Road.

Much-changed United were made to dig deeper than they could have imagined by the Premier League’s bottom side, who rallied impressively after falling behind to Odion Ighalo’s smart swivelled finish early in the second half.

Todd Cantwell levelled in the 75th minute when beating Sergio Romero from distance and Daniel Farke’s side looked capable of snatching it before Klose was sent off for wrestling Ighalo to the ground.

Norwich took the game to extra-time and Tim Krul put in an inspired performance between the sticks, but the penalty specialist was denied a chance to win another shootout when Maguire directed home in the 118th minute.