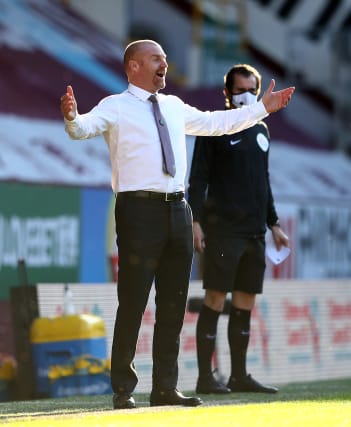 Sean Dyche promised to keep fighting for Burnley but stopped short of committing his long-term future to the club after overseeing a 1-0 win over relegation-battling Watford on Thursday night.

Jay Rodriguez’s 50th goal for his hometown club gave the Clarets reason to cheer after a tough week on and off the pitch.

Before the game the club continued a strong response to the ‘White Lives Matter’ banner flown over their 5-0 defeat at Manchester City on Monday as players again took a knee in support of the Black Lives Matter movement, but the focus was also on Dyche after an apparent falling out with the board.

A hard-fought victory over Nigel Pearson’s side provided some tonic as Dyche said his players had responded in the right way to events of recent weeks.

But asked to put to bed rumours over his own future Dyche, who has two years left on his Turf Moor contract, was more circumspect.

“The challenge of managing Burnley has been there all the time I’ve been here,” he said. “It’s always a challenge in varying ways and I enjoy the challenge.

“I’ve always said that somewhere down the line one party wants the other one gone or another party comes in. That is not to do with this moment, I’ve been saying that for six out of seven-and-a-half years when I’ve been linked with various situations and I’m still here.

“I’m out there working hard with this group of players to get results for them, me and the club.”

Dyche could at least name a full compliment of substitutes for this match after Phil Bardsley signed a new deal, but the week has seen Jeff Hendrick, Joe Hart, Aaron Lennon and Adam Legzdins depart to highlight Dyche’s frustration.

But the 48-year-old insisted the issue had been ‘parked’ as he spoke of a positive response to recent challenges.

“I think what it does show is the resilience and mentality of a strong group of players,” he said.

“I think it was a response to a difficult result, a difficult week. There was a lot going on.”

Rodriguez stooped to meet Dwight McNeil’s cross in the 73rd minute but departed the match soon after having taking a knock to the ankle, though Dyche believes it is nothing serious – and must hope so with Chris Wood and Ashley Barnes already sidelined.

Defeat for Watford keeps Nigel Pearson’s side hovering just one point above the drop zone, and Pearson was left disappointed after a strong start to the second half.

“I feel it was a bit of a missed opportunity,” he said. “That’s not to take anything away from Burnley, I thought they played well, they saw the game out pretty effectively once they’d taken the lead, but we’ve spurned opportunities and there were too many unforced errors that caused us problems.”

Watford were completely on top in the second half until the drinks break, but Pearson said there was no point dwelling on the breaks themselves, particularly on an evening when the mercury was still at 28 degrees centigrade at kick-off.

“I don’t think there is any point to say too much about that, they are part of the new organisation,” he said.

“All I would say is that when you are in the ascendancy sometimes it gives your opponent a chance to regroup. In the first half they were very much on top before the break as we were in the second half.

“Read into that what you will. But I don’t think it was a key factor in the result tonight.”