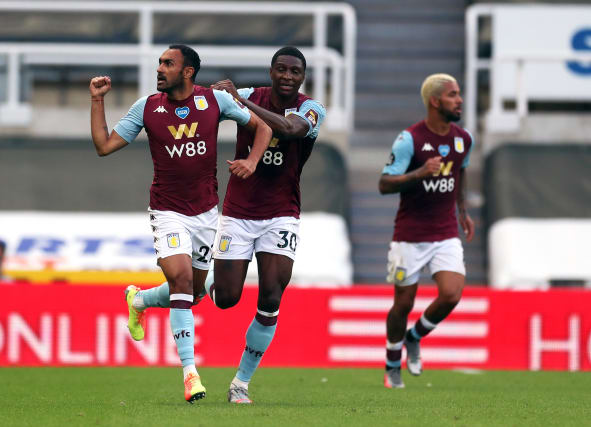 Dean Smith has called on Aston Villa to be more ruthless in their bid to secure Premier League survival.

Villa have closed the gap to West Ham, after being two points from safety before the restart last week, but remain in the relegation zone on goal difference ahead of Saturday’s visit of Champions League-chasing Wolves.

Smith’s side are winless since returning after drawing 1-1 at Newcastle on Wednesday having already drawn with Sheffield United and lost to Chelsea.

“We all know what a win means and what it can do for the league table,” Smith said.

“We aren’t giving too many chances away, but we need to convert our chances.

“We have to be more clinical when we get those opportunities, because we worked some great situations last night.

“All of the clubs are trying to drag other teams into it and you only do that by winning games.

“I’ve looked at the fixtures and you target some more than others and you set a gameplan for each game.

“We deserved three points against Sheffield United and Newcastle.”

It is a quick turnaround to face Wolves after the draw at St James’ Park, where Ahmed Elmohamady equalised late on after Dwight Gayle’s opener.

“We’re no different to Wolves, they’ve played (winning 1-0 against Bournemouth) as well, but you’ve got to nurse a few people back to full fitness,” he told a press conference.

“This is our fourth game in 11 days so it’s going to be a tough one.

“(Raul) Jimenez is one of the signings of the season, a proper goalscorer and one of the best centre-forwards that I’ve seen in the league this season.

“Nuno has done an unbelievable job at Wolves and they deserve to be where they are at the moment.”

Danny Drinkwater, Frederic Guilbert and Henri Lansbury are all in contention to make the squad but long-term injury victims Wesley and Tom Heaton remain out.