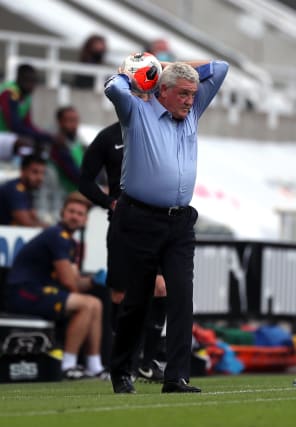 The Egypt international, signed three times by Bruce during his spells in charge at Sunderland, Hull and Villa, came off the bench to force a 1-1 draw on Tyneside and keep his club’s Premier League survival hopes alive.

Bruce said with a smile: “I should have left him in Egypt. I’ve signed him three times. He’s a great pro, a great lad who has served me well over the best part of 10 years.

“He was one of my best ever signings when I was manager down the road, bringing him in for nothing. I think I paid a few quid for him when I took him to Hull, and how often do these things bite you?

“But we’re disappointed with the goal because it was a poor corner and he’s headed it six yards past the near post and unfortunately, my goalkeeper has let it go through him.

“Look, we’re disappointed with that and disappointed that we didn’t hold on because usually, that’s what we’re good at. But it didn’t happen tonight.

“We’re disappointed that we didn’t get the result, but four points from the opening two games, I think we would have accepted that.”

Newcastle, who were so impressive in victory over Sheffield United on Sunday, were a pale imitation against Villa, but took a 68th-minute lead when Andy Carroll crossed for fellow substitute Dwight Gayle to hold off defender Ezri Konsa and score his first goal for the Magpies since May 2018.

However Villa, who had enjoyed the better of the first half, but failed to take any of the chances they created, levelled through Elmohamady with seven minutes remaining and might even have won it at the death.

Manager Dean Smith said: “Going a goal down in the manner we did with a lack of concentration from Ezri was a bit of a kick in the stomach, really.

“But the two subs came up with a goal, a great ball in from Conor Hourihane and a great header from Elmo, who ended up getting Ezri out of the doodoo a little bit.”

Elmohamady’s intervention did him little harm as he attempts to persuade Smith that he has a role to play in his starting line-up.

The Villa boss said: “I’m pleased for Elmo because he’s been frustrated. He wants to play and I’ve gone a little bit more defensive with Ezri playing there at the moment.

“Elmo has gone and got Ezri out of it a little bit and done himself no harm with getting that goal.”