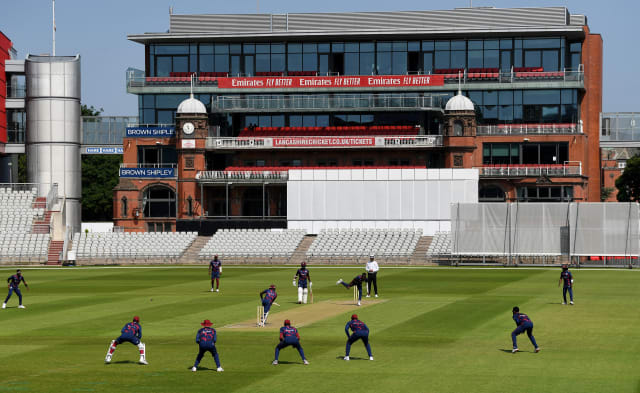 Jermaine Blackwood’s hopes of pushing for a Test recall took a hit as he was dismissed cheaply on the second morning of the West Indies’ intra-squad warm-up match at Emirates Old Trafford.

Blackwood, whose only Test century came against England five years ago in Antigua, was asked to open the batting for Jason Holder’s XI and launch the response to the 275 all out posted by Kraigg Brathwaite’s side.

Instead he made just three runs before allowing Marquino Mindley to uproot middle stump after squeezing one through his defences, while his side reached lunch on 90 for two.

While Monday’s play – the first top-level cricket anywhere in the world since the suspension of the Pakistan Super League in mid-March – saw some of the tourists’ first-choice bowlers face off against what looked like their preferred top order, this was more a case of fringe players jostling for position.

The West Indies group is split into 14 official squad members, including Blackwood, and 11 reserves and it was two of the latter number who made hay under sunny skies in Manchester.

Sunil Ambris (52) and Sheyne Moseley (31no) shared a stand worth 86, though both took advantage of some sloppy work in the field that left the pace attack distinctly underwhelmed.

Ambris got after a lethargic Chemar Holder early on, getting off the mark with an on-drive for four then cutting a short ball to boundary.

He barely slowed down, swinging freely and sending a series of aerial shots just over the infield. He might have been caught at square leg when he thrashed a pull to Keon Harding, but the ball burst through the fielder’s hands and smashed into his mouth, forcing him to the dressing room for treatment.

Ambris raced to 50 in 59 balls with a swipe over the top of Mindley and survived a full-throated caught-behind appeal from Anderson Phillip moments later. He eventually fell lbw to Holder, with a useful score but an unconvincing method.

Moseley, who has yet to make his international debut, was a more sedate presence and progressed gently after an early reprieve by Shai Hope in the slips.