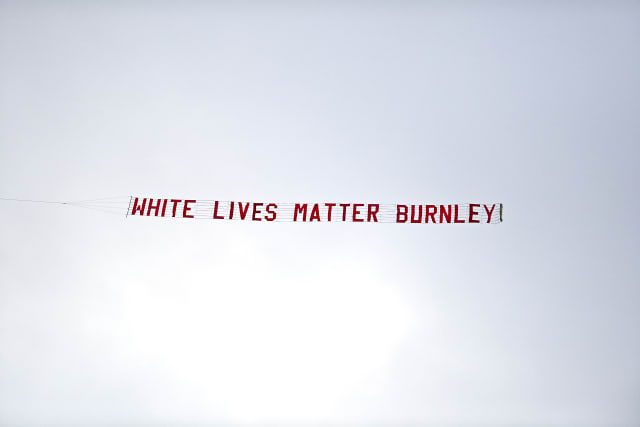 Sean Dyche is keen to ensure the actions of a minority do not overshadow the work done by Burnley in the community after a banner bearing the slogan ‘White Lives Matter’ was flown over the Etihad Stadium during their match against Manchester City.

The club have condemned the banner and promised to impose life bans on the perpetrators if they can be identified, and Dyche said the message stood in contrast to the club’s principles.

“As a club all we can do is attempt to put out the right message and you know the amount of work done in the community here,” Dyche said.

“What has been achieved in the community over the last five years has been nothing short of fantastic, in terms of the links in the community and the number of people affected, and we don’t wish for that to be undermined by a few making a statement that is unacceptable.”

In post-match interviews, Burnley captain Ben Mee said he was “angry and embarrassed” after seeing the banner, and Dyche said his comments reflected the thoughts of the dressing room.

“Ben spoke very well, very authentically as the man that he is. I played my part, as well as the chief executive and the chairman as well. We’re united as a club.

“I can’t speak for everyone in the town, but I’d like to think this is looked upon as the actions of a small number of individuals rather than the whole town and the whole club.”